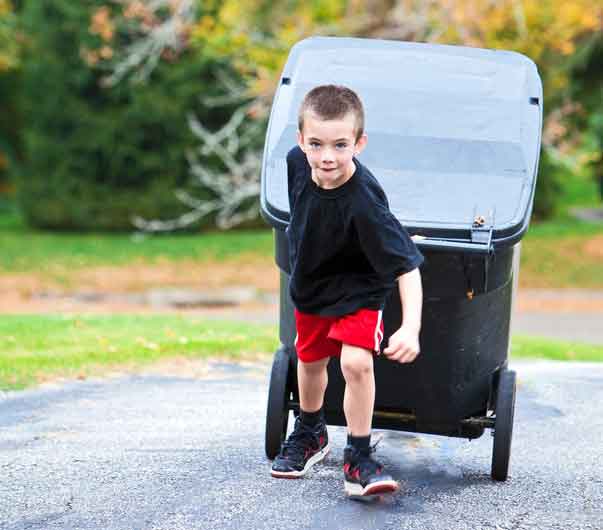 Can You “Achieve” An Empty Trash Can This Thanksgiving?

As we wheeled a giant black municipally-approved trash can to the curb in San Diego a few weeks ago, it felt ridiculously light.

Inside, one forlorn small bag of kitchen waste was lying in the bottom.

Our first reaction was;

But none of the above was the case.

We had simply stopped throwing away anything that could be eaten, composted, or frozen.

Equally important, about six months ago we became far more conscious about our buying decisions long before the actual consumption began, thanks to watching a compelling video chronicling the home life of “zerowastehome” blogger Bea Johnson, who is now known as “the high priestess of waste-free living.”

Granted, we’re not close to converting the whole household to this program.

After all, two pairs of shoes arrived from Zappo’s not long ago, and they came in three boxes, replete with lots of tissue paper, toe stuffing, and other waste.

But we’ll at least recycle all that.

But our first big zero-waste focus was on the kitchen, and we’re doing pretty well: reducing waste has meant rethinking a lot of habits, most of them involving the purchase side rather than prep’ing and eating.

We shifted our shopping habits to grocery stores and farmers’ markets that emphasize bulk bins, produce, and a fish/meat department that doesn’t seal anything in plastic trays.

We brought our own bags and containers.

And so the experiment continues. No, it’s not an experiment: it’s a new way of living.

To get started on your own, know that your timing is auspicious: Thanksgiving week is here— a time of rampant consumption (and waste).

Know also that this month is the EPA’s Food Recovery Month of Action, which has been a virtual secret thanks to limited coverage (i.e. it’s not “Black Friday”).

Need motivation, beyond the obvious satisfaction (and financial savings) of reducing your household’s trash?

First, there’s guilt…aka your conscience. While many American’s are throwing about half of the food they purchase away, 14 percent of American households “were uncertain of having or unable to acquire enough food to meet the needs of all of their members at some time…” (EPA).

You know all these, so do your own checklist and assuredly it will include the following:

—You throw food away because it’s expired.

—You bought too much.

—It rotted in the fridge or on the counter because you’re lazy or dine out often.

—You’re not much of a cook (take a lesson/get inspired!)

—It became overripe and was “ugly” or you didn’t know what to do with it.

—You always buy too much because psychologically the notion of “abundance” is important to you.

—You are unaware that throwing away food also wastes other resources—especially water, but also the fuel needed to transport it, the human effort expended to produce it, and—in the case of animal meat, the LIFE taken to bring it to your shopping cart.

Then there’s the “good example,” and it’s in France, that bastion of gastronomy.

They’re curbing food waste BEFORE consumers even make a purchase. Where? In the supermarket, of course.

At first, they passed a law that threatened to fine STORES not taking direct action:

The effort was the largest attempt yet to use government regulation to curb the global issue of food waste.[R]educing food waste by 50 percent at a global scale could feed up to 1 billion people.

This is why France is looking to create education programs to accompany its supermarket ruling, understanding that a change in outlook needs to accompany any government regulatory programs.

The law raised just as many problems as it did solutions. In France, for example, more than 67 percent of the 7.1 million tons of food wasted is actually thrown out by consumers. Here in the United States, the numbers are just as damning.

While in 1980 food waste accounted for less than 10 percent of total waste, it now makes up to a fifth of the country’s garbage.

That translates to $640 worth of food a year, per household. These numbers point to the larger issue of food waste, one which might not be so easily solved with fines on supermarkets.

The fine was hard to impose, so…

…the proposed law was struck in mid-August, forcing France’s Minister for Ecology, Ségolène Royale, to obtain instead a series of voluntary agreements with the targeted supermarkets where they pledged to curb their food waste.

It’s going to be an interesting Thanksgiving, isn’t it?

Embrace the reduction of food waste as a goal, an urgent need, and quite frankly a game.

After all, it’s kind of fun. Eventually, you won’t need a trash can at all: just ask Bea Johnson.

TEDx Manhattan: You Be Watchin’!

Cancer Research: Red Meat and The Luck of the Draw

Detox Your Home For The Fall: 10 Tips From MadeSafe.org