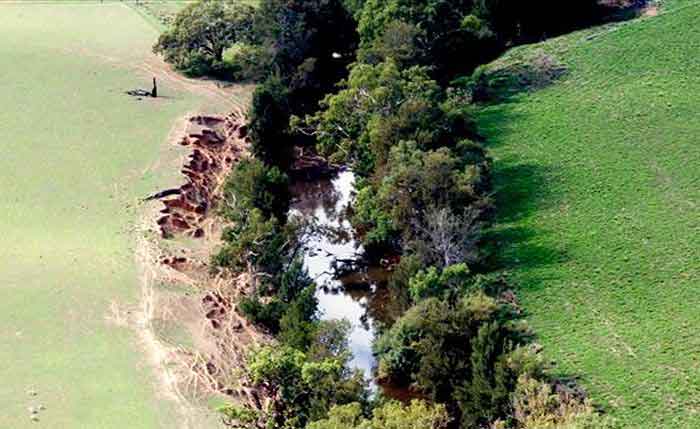 The debate centering on a climate agreement in Paris this week was a reminder of the difficulty of addressing climate change.

Greenhouse gasses (GHGs) released into our atmosphere are intrinsically connected to economic productivity.

We’ve devised a world in which getting ahead is synonymous with shoving carbon into our atmosphere, so, to a lot of people, attempts to reduce GHGs feels like a limitation on economic growth.

But out of the climate talks this week in Paris leaps a few new technologies combined with some old (even ancient) ways.

Some may be a salvation for the climate impacts of global agricultural systems.

Sequestering carbon in the soil through simple farming techniques, known as “carbon farming,” has the potential to dramatically reduce these impacts.

For the first time in the 21 years of climate negotiations, delegates at this year’s Conference of the Parties (COP) have put forth a framework for addressing how carbon farming can play into global climate agreements. Dubbed “4 per 1000” and presented through a French initiative, the goal of the framework is to return 0.4 percent of atmospheric carbon into the soil every year.

As Judith Schwartz of Food and Environment Reporting Network(FERN) explains, this little percentage could have a big impact.

At the signing, French Agricultural Minister Stéphane le Foll said that returning carbon to the soil 0.4 percent annually would compensate for all man-made C02 emissions.

The concept of carbon farming is relatively simple.

The industrial agricultural system we’ve developed over the last 60 years while being incredibly productive, robs the soil of carbon and other nutrients. Carbon, in the form of soil organic matter, is the thing that gives soil life.

Techniques like cover cropping (never leaving the fields bare), no-till farming (leaving the soil intact while preparing and planting), crop rotations, and carbon banking in perennial plants, take carbon from the atmosphere and lock it up in the soil.

Regenerative farming would also increase the fertility of the land, making it more productive and better able to absorb and hold water, a critical function especially in times of climate-related floods and droughts.

In fact, research shows that in some regions a combination of cover-cropping and crop rotation vastly outperforms conventional farming.

So why isn’t everyone doing it?

One of the problems, as Eric Toensmeier explains in his upcoming book The Carbon Farming Solution (to be released in February) is that carbon farming is not a one-size-fits-all venture.

Cover-cropping may work in the southeast where winters are shorter, but may not work in northern Minnesota, for example.

For more farmers to take up these practices, they need the assurance that they will work for them economically, and this type of assurance will come through research.

But, research dollars for agriculture in the U.S. are not exactly flowing to sustainable agriculture.

Referencing a recent analysis by the Union of Concerned Scientists (UCS) Joseph Erbentraut of the Huffington Post explains how little those numbers are:

Specifically, according to the UCS analysis, only 15 percent ($44 million) of the total amount of National Institute of Food and Agriculture (NIFA) grants issued in 2014 ($294 million) included any elements of agroecology, defined as applying ecological concepts to creating sustainable food systems through techniques such as rotating crops and upping biodiversity on farms.

So, the French, along with 25 other countries and 75 non-profits, jumped on to the “4 per 1000” agreement as a sort of no-brainer approach to agriculture for the health of our planet and insurance against world hunger amongst other things.

A signature that was glaringly absent? The U.S.’s.

It seems like this soil agreement is too big of a threat to the industrialized farming system (and big agribusinesses) that have a hold on the U.S. economy.

Lilliston also said it is significant the program highlights agroecology or agricultural practices that incorporate ecological principles, so as to promote conservation and soil restoration.

“The French government has made it clear that agroecology is part of the strategy,” he said.

The U.S. may have been reluctant to sign on to the agreement because of discomfort with the term agroecology, “because it has social movement and political implications,” said Lilliston.

The solution to mitigating the climate impacts of agriculture are quite literally underfoot, yet our leaders in the U.S. seem too fearful of innovating out of a food system that has put profit above all else for far too long.

Consider a recent study from the non-profit Global Justice Now which found that food industry giants Cargill, Tyson, and Yara combined have larger carbon footprints than Netherlands, Vietnam, or Colombia.

In other words, these Big Ag businesses pump out more carbon per year than a country with 93.3 million people in it (Vietnam).

Clearly, there are some big opportunities for reducing GHGs in the agricultural sector (which scientists estimate, by the way, may contribute up to 29% of GHGs emission annually).

Much of the world will move forward with carbon farming, so let’s work towards getting our country to wake up and move forward too!