Precious Actress Gabby Sidibe Weight Loss Story – What Does She Look Like Now? Is She Skinny? + Before and After

All women dread hearing the words from anyone that they are “fat” and “ugly”.

That’s why there are so many haters on social media – those who feel inferior, unhappy, and guilty about their own body and appearance often want to show some hate to people who are doing something about it.

Often, if you are not the desired shape, size, or look, particularly in the entertainment industry, it means you could easily get ousted or not ‘used’ again.

People, too, often feel green with envy and threatened by good-looking beautiful people with beautiful bodies.

Gabourey Sidibe knows about being rejected, in fact, she was once told by a renowned actor that she should quit the industry because it was so image-conscious!

All of the above probably made Gabourey Sidibe seek weight loss surgery.

But another thing that made her take notice of her health seriously was when she learned that she had type 2 diabetes [2].

She was alarmed to know that her life was at risk, and it was then that she decided she had to lose weight.

“I just didn’t want to worry,” she said in the magazine.

“I truly didn’t want to worry about all the effects that go along with diabetes. I genuinely [would] worry all the time about losing my toes.”

She also said that she did care about her health, saying…

“It’s been my body my whole life, and I didn’t want to be afraid anymore. And I’ve been feeling like that for some time.”

How did Gabourey Sidibe lose her weight so quickly? 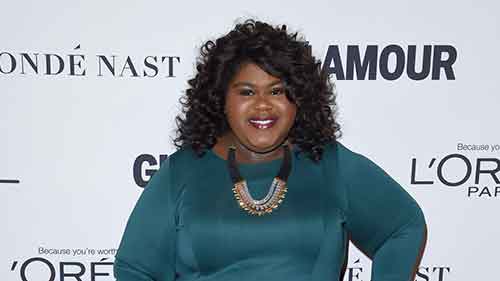 Soon after Gabourey learned she had type-2 diabetes, she consulted with her doctor.

He was a bariatric surgeon, Dr. Bradley Schwack.

After seeing him, she decided to undergo the necessary weight loss surgery where he would remove 80% of her stomach to reduce its capacity.

She would feel full after eating much smaller meals. She indeed went under the knife looking fabulous afterward.

She was able to flaunt her ‘new’ body on Instagram.

Altogether, her fantastic weight loss surgery not only dropped the pounds but help her overcome type 2 diabetes, anxiety and depression, as well as bulimia.

Now she can afford to share her wonderful weight loss diet secrets to maintain her weight loss.

And, of course, her fantastic weight loss made her available to start receiving gentleman callers!

When she was growing up, Gabourey loved to drink sodas frequently – maybe that would go along with a burger and fries.

All these unhealthy and poor eating choices were the reason why she started gaining weight.

When she opted to lose weight, that was the first thing she cut out of her new health regime, and that was sodas.

She opted to start drinking ice-cold water with a few lemon slices in; this kept her hydrated and flushed out all the toxins from her body.

2) Out with the junk food

Another step she took was to oust junk food from her life and diet.

When she was little, her life consisted of heaps of junk food.

Oreos and fries were high on the list, as were burgers, pizza, and plenty of other processed foods.

Getting rid of these would help to lower the trans-fats and salt intake [3] which are super big when it comes to putting on weight.

She replaced these with snacks such as veggie chips, hummus, and saltine crackers.

3) She also eats at the right time now

Not only is she making healthy food choices, but when she eats, she eats at the right time.

She started consuming 6-7 small meals per day and she would drink water 20 minutes before each meal to prevent her from overeating and to keep her hydrated.

4) She maintained much smaller portion sizes

Maintaining portion sizes is crucial when you are trying to lose weight.

No matter how healthy you eat, you still need to portion control even the healthy foods; otherwise, you will still gain weight.

Gabourey Sidibe chatted with a nutritionist and her trainer so she could get advice on eating the right amounts of good carbs.

Other healthy foods include protein and healthy fats [4] such as avocado oil, olive oil, nuts, and seeds.

The best way to practice portion control is to use a smaller plate.

Your brain tricks you into believing that your plate looks full with a comfortable amount of food, but in fact, it is much less.

6) She cut down on salt and sugar

Gabourey adored eating beloved Oreos, cupcakes, and fries, binging on them whenever she had the whim.

But since her diagnosis, she made a firm decision to give them up because she realized how high the sugar content was.

When you are diabetic, you must control the amount of sugar you consume [5].

She followed an exercise plan too

After she started eating healthily, Gabourey could feel her energy coming back and she found that she was more active.

But she also knew that to speed up the whole weight loss process, she would have to get a personal trainer who would be able to help her get back in shape and help her to lose weight even faster.

Anyone can achieve the same results she did to achieve a better-shaped; and healthier body. Gabourey Sidibe is a living example of how it paid off for her.

She motivates anyone who wants to improve their lifestyle and overall well-being.

Just by following the right diet and starting to exercise at a gym or at home – there is no excuse – you will start to see the results in just a few weeks.

Can you believe Gabourey’s name means “the one with the beautiful cheeks,” and her middle name means “my queen?”

Isn’t that a wonderful reminder of who Gabourey is and who she has become?

Gabourey, though, says her weight was always an issue for her from an early age, with her battling her weight her entire life.

She told Oprah Winfrey that her first diet was already at six.

Not only did her father call her fat, but so did her mother.

Then she underwent weight-loss surgery to start losing weight and get her fitness levels up.

This was also because she discovered that both she and her brother already suffered from stage-2 diabetes.

She has a wonderful sense of humor and always lets this shine, continuing to be a role model for young girls coming up behind her.

This is what she told Nylon…

“Listen, I’m a solitary, selfish person. I have no kids, and I feel bad about my selfishness. But I hear people tell me about how my struggles have helped them, and I’m glad that my selfishness is helpful to someone else…I love my body, and I deserve love. We all do, at any size.”

When it comes to weight loss, Gabourey has realized that the stars are just like everybody else.

The people in Hollywood know that the subject of weight is often a very big topic, sparking countless discussions, articles, as well as tabloid features.

And so it can be pretty frustrating for stars to carry on a few extra pounds when they know that it affects their quality of life and their work.

They know, inevitably, too, that their weight will also come under the spotlight.

That is why so many plus-sized celebrities, men and women, have made big transformations in their bodies.

Each of them has followed their path, with amazing results.

Many of them started their own weight loss journey because of major health issues as well – they received a wake-up call, which immediately put them on a new way of eating and exercising.

“I was in a war with my body for a long time. If I’d started treating it better sooner, I wouldn’t have spent so many years hating myself. But I love my body now.”