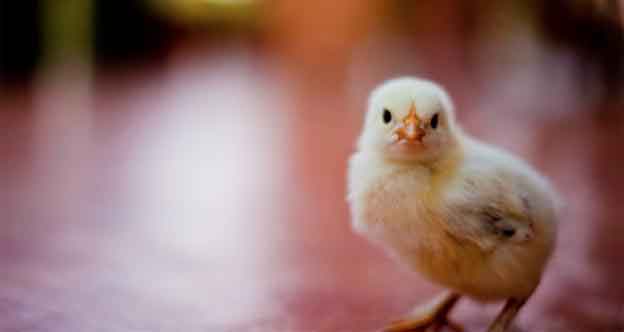 Hatching Good News; Perdue Chicks are Off of Antibiotics

It may not be Easter but baby chicks are making the news nonetheless.

That’s because Perdue Farms has made a big move in the right direction with their decision to stop pumping antibiotics into their eggs before they hatch.

If you missed this great report by Dan Charles on NPR’s “All Things Considered” you can get the full story here.

The switch was not easy for the company, he reports, “Getting to this point took 12 years… When they first tried it, a lot of chicks got infections and died.”

But the good news is that this landmark change has ultimately resulted in healthier, cleaner poultry than before.

Charles explains how the antibiotic gentamicin was traditionally used in Perdue’s hatchery which processed up to 1.2 million eggs each week.

Hatcheries don’t get a lot of attention. From the outside, Perdue’s hatchery in Salisbury, Md., is just a simple, one-story cinder block building. What goes on inside, though, is amazing.

More than 1 million eggs arrive here every week from breeding farms a few hours away in West Virginia. Unlike the eggs you buy in the store, these eggs are fertilized; there are embryos inside.

They go into massive heated incubators for 18 days. Then, when they’re almost ready to hatch, they’re wheeled out into a hallway. Tray by tray, they go through a vaccination robot.”

We are all becoming more aware of how the use of antibiotics can increase the risk of bacteria becoming antibiotic-resistant, making human infections harder to treat.

Journalist Maryn McKenna is the author of Wired magazine’s blog, Superbug, and has been covering this topic extensively.

She goes into more detail in her post today on Perdue’s big news:

The concern that lies behind routine animal antibiotic use is that most of the drugs used on farms are the same ones used against infections that humans develop.

Bacteria in animals’ guts or on their skin develop resistance to protect themselves; when the animals are slaughtered, or their manure washes or wafts off the farm property, the resistant bacteria go along too.

When humans pick up those bacteria from meat or the environment, they can’t be treated — because the drug needed to cure them is the same one that was used on the farm in the first place.”

This is a national milestone and we salute Perdue Farms for taking a leadership role as the third-largest chicken producer in the United States.

We hope this trend continues to rise and that other industry is soon to follow in their footsteps.

And for farmers who are are going above and beyond, check out Barnraiser.com. or just share the good news about a farmer near you below.