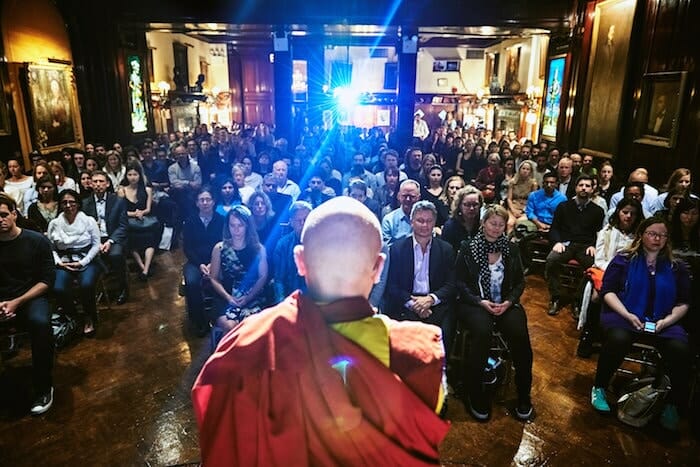 Solo To Social: Why Group Meditation Can Be Highly Motivating

Meditation is usually considered a solitary practice. Picture a crossed-legged person with their eyes closed sitting alone in a quiet sunlit room with a look of utter serenity on their face.

How many of us (perhaps via well-intentioned New Year’s resolutions) have promised ourselves that we will develop our own mediation practice?

Alas, many of us end up looking more like a three-year-old in a church pew struggling to sit still, because let’s face it, folks, finding inner peace can be, well, a struggle.

Even so, more and more Americans are looking to incorporate meditation and mindfulness into their health and wellness routines.

Far from feeling alone in their search for enlightenment, many are turning to a new type of (dare we call it) social meditation that’s made its way into the collective consciousness.

In fact, group meditation is one of the predicted wellness trends for 2016.

According to a recent article in Well & Good:

Girlfriends who before may have met up for a SoulCycle class to catch up are now heading to Unplug in Los Angeles and MNDFL in NYC for drop-in sessions, and The Path’s meditation gatherings are be-seen affairs packed with young, creative professionals.

Meditative events are diversifying too, so you may hear a lecture from a Buddhist monk, enjoy a swanky vegan dinner after sitting in silence, learn to knit as a group while focusing your mind, or get treated to a sound bath.

If you are thinking that this all sounds way off in hipster la-la-land, then allow us to bring it down to earth for you with a little perspective about the benefits of group meditation.

Humans are social beings. We like to share our experiences, even if those experiences happen to be of the silent and meditative variety. Being part of a group is especially helpful for those new to meditation.

The dynamic of sharing a space with like-minded people while tapping into inner peace and silence will motivate you to keep up the practice.

Groups also provide an opportunity to share feedback, socialize, and learn from one another.

It’s easier to talk yourself out of doing something (or put it off) when you are the only one that has to show up.

On the other hand, joining a meditation group can become a routine similar to going to the gym.

Having a set time to show up for a daily or weekly practice sets a precedent and holds you accountable.

Mounting evidence points to the finding that joining a group is good for our health if for no other reason than that loneliness is so VERY bad for our wellbeing.

Studies have shown that social disconnect has the potential to lesson our lifespan as much as obesity.

Research such as that collected by Robert D. Putman for his book, “Bowling Alone: The Collapse and Revival of American Community,” finds that the simple act of joining a group can cut our risk of dying in the next year by half! We crave community and a sense of belonging.

4) CHANGING THE WORLD FOR THE BETTER

Ever heard of the collective consciousness?

In fact, scientists such as cellular biologist Bruce Lipton believe that our consciousness as a group has the potential to change the physical world.

As explained in a recent article in yogaanonymous.com:

An interesting experiment tested a theory called “The Maharishi Effect” in Merseyside, England. A number that exceeded one percent of the population meditated together every day from 1988–1991. As a result, the crime rate dropped so much that Merseyside went from third highest to the lowest ranked city in England, during the time of the analysis. Meanwhile, the control town of non-meditators held a steady crime rate. Meditation was the only factor in the study that could account for the change, as the scientists calculated police practices, local economics, and demographics that remained the same throughout the study.”

In an article for Mindful.org, Betsy Nelson lays out a step by step guide for starting what she refers to as a “Mindful Meditation Group.”

Begin with the basics of setting a time and place and sending out e-mail invitations. Nelson then goes on to explain how the practice itself is set up:

1. Start with a quieting, centering, “getting present” five-minute sitting.
2. If there are new people, introduce yourselves with names & something about your current practice or what has drawn you to the group.
3. You might consider beginning the practice with reading or quote, followed by a bell to indicate it’s time to begin meditating.
4. Sit quietly together and meditate—for about 20–25 minutes for a 60-minute group, and/0r 30–40 minutes for a 75-minute group.
5. Afterward have time for talking and mingling.

Testogen Supplement Review Plus Real Customer Reviews & Before and After Pics

Detox Your Home For The Fall: 10 Tips From MadeSafe.org

David is a certified personal trainer, a licensed clinical pharmacist nationally recognized for conducting novel pharmaceutical research, and a practicing rheumatologist and immunologist for 7 years.