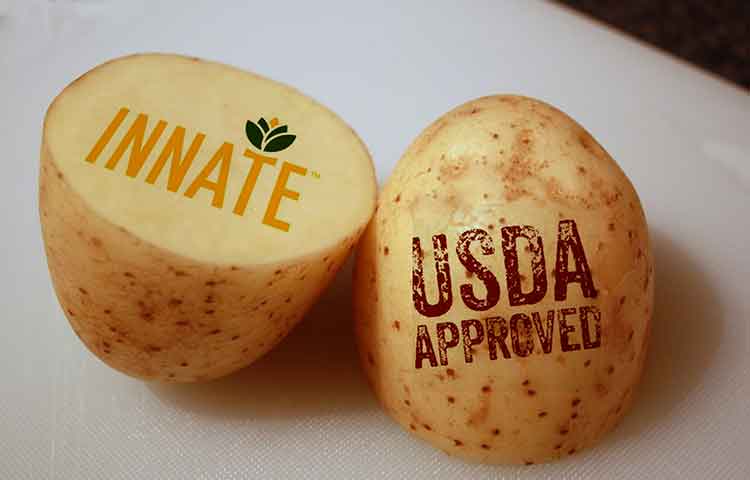 Earlier last month, the USDA approved a GMO potato, the first of its kind in over 20 years.

This techy-tuber, called Innate and developed by the J.R. Simplot Co., has been designed to develop less acrylamide (a suspected carcinogen) when deep-fried and to resist bruising and browning.

It debuts a new era of GMOs that “aim to provide benefits to consumers, not just to farmers as the widely grown biotech crops like herbicide-tolerant soybeans and corn do…” according to Andrew Pollack of the New York Times.

Innate skirts the line of what we typically think GMO means: it is most certainly genetically engineered (one estimate puts the cost of its development at $136 million) yet the inserted genes come from … another type of potato.

Nonetheless, if the FDA required GMO labeling, this one would carry the label front and center.

Tom Philpott of Mother Jones reported this week on the new potato’s tenuous entrance into the market:

If Innate is going to take off, Simplot will have to win over three major factions: The first is farmers, who will pay a premium for those genetically engineered traits.

According to Simplot spokesperson Doug Cole, they’ll be able to “recoup” the higher price because the GE potatoes will bruise less easily and farmers will have fewer unsellable potatoes on their hands.

The second group is big buyers such as McDonald’s.

The third is you and me—consumers.”

OK consumers: do you trust a potato that doesn’t turn brown? Ironically, catechol, the enzyme that makes potatoes and apples turn brown, forms to protect produce from rotting!

Another conundrum is anyone’s desire to have fewer carcinogens present in the enormous amount of fries eaten by the American public, but should they come from a GMO-tinkered source rather than normal hybridization?

Philpott also quoted a McDonald’s spokesperson as saying “McDonald’s USA does not source GMO potatoes, nor do we have current plans to change our sourcing practice,” a statement reiterated by multiple news outlets and construed to mean the fast-food giant will refuse to buy the product.

Chase Purdy of Politico’s Morning Agriculture points out some of the hidden meanings in McDonald’s statement;

“…nor do we have current plans to change our sourcing practices.”: Restaurants test products internally and among customers before making them regular menu items to ensure they will be well received. But because of USDA’s biotechnology rules, the Innate potato has effectively been under lock and key at J.R. Simplot’s facilities and highly regulated locations. USDA issued its approval on Nov. 10, not nearly enough time for any company to sign off on its use or to test the product. But even if it was, McDonald’s buys 3.4 billion pounds of potatoes each year. J.R. Simplot meanwhile, currently has just 400 acres in production.”

So, the Innate potato and McDonald’s are still in the game, but due to its higher cost and consumer skepticism, it seems like it will be a while before this potato starts to take up any significant market share.

Meanwhile, Food and Water Watch’s Action page is in the fray: they’re putting pressure on Burger King to commit to not using the Innate in its fries. You can sign their petition if you desire.

Are Antibiotics in Meat on the Decline?