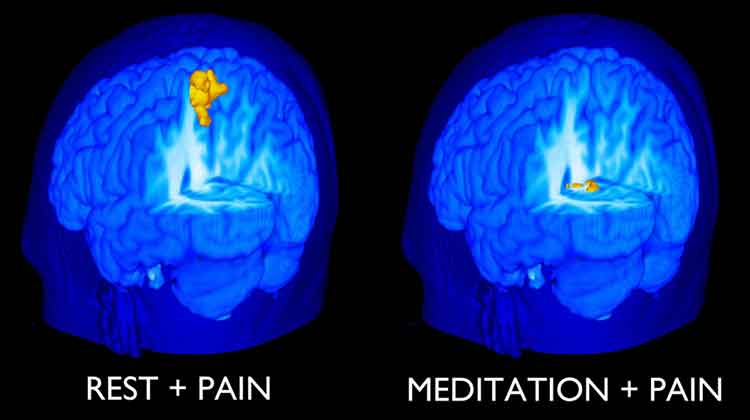 We all know that the practice of meditation is a known way to “clear the mind,” become “more grounded” in the here and now, and “centered”—in other words, it’s a great way to handle a world increasingly cluttered by stimuli.

In addition, meditation establishes a stronger connection between mind and body.

And while that connection is not completely understood, it is nonetheless a powerful source of healing energy that can make a significant difference in our overall well being.

New science backs up the theory that mindfulness meditation can reduce pain.

A recent study published in Journal of Neuroscience found that within two groups, one of which received a placebo cream and the other asked to practice mindfulness meditation, the meditating group experienced greater pain relief.

According to an article in Natural News,

Translation: the MRI scan indicates that the group practicing mindfulness meditation seemed to be using different regions of the brain than those using a topical cream.

Another recent article in Time elaborates:

The meditating group also experienced a deactivation of the thalamus—the part of the brain that acts as a kind of club bouncer that tells pain to stay outside the velvet rope.

All in all, it’s another step forward in our understanding of these powerful tools: mindfulness and meditation.

Whoa! Did Congress Really Just Agree On Something, And Was It Regarding School Lunches?

Watch! And See How The Good Life Can Be “A Small Good Thing”