Jason Momoa is an American actor and producer. He’s a big guy with a big name in Hollywood.

He has big movies, like Aquaman, Game of Thrones, and others, to his credit.

For those big roles, Jason Momoa would hone in on his physique and get it into tip-top shape.

Momoa also appeared on a couple of seasons of Baywatch which was actually his first major movie.

Even though he was born in Hawaii, his parents split up. So he grew up in Iowa, where everybody was either a football player or a wrestler.

He was a skateboarder and said he felt like an outsider.

He went back to Hawaii at 19, working in a surf shop.

There, he auditioned for Baywatch Hawaii, beating more than 1300 aspiring actors. He fell in love with acting, but jobs still didn’t come easy.

He put his Baywatch money towards the things he loved, traveling, climbing, painting, and music.

But his movie career took off and has made him famous.

Apart from acting, he adores climbing.

In 2019 he told Men’sHealth, “For Aquaman, we incorporated things I love. I love rock climbing. When you’re training for a rock-climbing problem, you want to diet right and get in your best shape because it’s something you’re passionate about.”

We are going to talk mostly about how Jason got the body he did for the movie Aquaman.

The Workout Principles of Jason Momoa 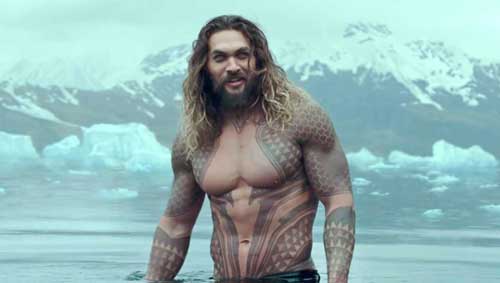 He much prefers staying fit outdoors with his favorite activity, rock climbing, amongst many others. That super bod also does come from gym work, however.

We are concentrating on how Jason achieved his body for training for Aquaman, one of his top movies.

To build muscle for this movie effectively, Jason did five weight training sessions every week.

He continued with his climbing activities and also rode his bicycle a lot. But the Aquaman training program was a routine that fitted Jason perfectly – allowing him to obtain the needed results regarding muscle strengthening.

It is a very intense training program technique. It consists of carrying out quite a lot of repetitions with fewer heavy loads.  You have to reduce the maximum time for recovery.

Basically, the principles of AR-7 training are the opposite of the techniques usually used by bodybuilders to gain muscle mass.

The AR-7 program consists of 4 to 5 basic exercises. It’s a way of getting a good workout – doing squats, military bench presses, bench presses, push-ups, and even dips.

For each weight training exercise, Jason performs 7 sets of 7 repetitions with 7 seconds of recovery.

For this weight training exercise, Jason will do 6 sets of 6 reps with 6 seconds rest.

For this weight training exercise, Jason would do 5 sets of 5 reps with 5 seconds rest.

In-between each round, Jason would take only 1-2 minutes’ rest. At the end of each of the training sessions, he would then perform a cardio exercise.

This would take about 15 minutes. All in all, Jason’s AR-7 strength training sessions would take almost 2 hours.

The AR-7 method is particularly intense

This technique allows a person to feel burning in the muscle groups very early on in the session.

The technique also develops endurance because there is almost no recovery time.

Another advantage of Jason’s weight training program is that the risk of injury is reduced. This is because the weights he works with aren’t that heavy.

It is not recommended for beginners though; it is for the experienced athlete.

Later on in the day, Jason comes back for more physical activity that will last about an hour

This is not an easy sport and favors a lot of arm activity which has allowed Jason to build such strong, well-formed biceps and forearms.

Lifting weights was hard for Jason at first because he prefers to exercise outdoors. But still, he was training for Aquaman and used the Accelerated Results 7 (AR7) plan designed by his trainer.

Jason Momoa’s diet and workout program allowed him to sculpt his body.

He consumed on average 2,500 calories per day divided into four meals.

For a big guy like him, his caloric intake remains quite reasonable and allows him to make full use of his muscle development.

He will eat two slices of whole-grain bread. He has this with some honey and around 40 grams of peanut butter. He also eats plenty of fruit, particularly blueberries and watermelon.

He usually chooses raw, fresh tuna with greens and avocado.

He doesn’t normally leave out a pint of beer which is one diet pleasure. So for lunch, he will take in about 680 calories.

He consumes 500 calories – 280 grams of lean steak, cooked with a bit of olive oil, and some spinach.

Jason eats spinach again coupled with 280 grams of chicken breast. He will have an avocado again, and he pint of beer again.

Here’s a breakdown of the foods that form part of Jason’s diet plan:

As any health expert can tell you, there’s no such thing as too much cauliflower or too many leafy greens. For your training, eat plenty of veggies.

The “Aquaman” eats fruit before a workout or when he has a long day of shooting ahead – this gives him a boost of energy.

Jason adores his Guinness beer – in fact, he won’t go without a daily pint. As for you, you will have to decide for yourself whether you can allow yourself this privilege!

Jason’s natural peanut butter is tasty, cholesterol-free, and low in salt. If you also eat peanut butter, make sure it’s not the one laden with sugar.

Jason often eats honey sandwiches before his workout. We’re assuming the bread he eats is either whole grain bread or sourdough!

Laden with protein, chicken is delicious and filling for anyone who works out.

Jason loves steak but he ensures it is lean steak.

His all-time favorite to eat is known as skipjack tuna.

See Jason’s supplement list below that he takes with his working out program and his diet.

If you are on a muscle-building diet, you will know how important they are.

For the role of Aquaman, Jason likes to keep things simple

1) Whey protein is almost a given…

you will notice that all top athletes and eat whey protein. For Jason, too, it is essential as he sometimes works out 3 times a day.

He really exerts himself at his workouts, so it makes sense he would down whey protein – especially when you are trying to bulk up.

Creatine is used by Jason as well.

It’s a natural substance found in all muscle cells. Athletes take it to maximize their energy production during workouts. Just ensure you take a high-quality one.

Mass gainers helped to bulk up Jason for his role in Aquaman.

These vary from type to type. For the most, they offer a boost of extra protein and carbs.

He recommends you do these to get his rippled physique

His wife tried to get him to do yoga once, but he will have nothing of it. He had an interview with Men’sHealth and this is where he spilled the beans on how he obtains his hunky physique.

“I rock climb a lot. I love the way it feels. I like being upside down. I always loved climbing trees as a kid and swinging in the breeze,” he revealed.

He does also pump iron at the gym

He finds that “lifting weights is challenging” for him. He absolutely cringes at the thought of yoga.

Ha-ha. He said he was in a yoga class once and “everyone was holding their arms up and I was like, ‘This is so hard!”

For Aquaman, he decided to add even more muscle to his frame.

He did lots more cardio

“The most important muscle in your body is your heart, so I like to work up a sweat in the morning,” he said.

“I actually found training with weights very difficult at first, just because of how set in stone it is.”

If Jason is training for a role he will do weights, but when he is not training for a role, “whether I’m packing on muscle or cutting body fat, I do go back to climbing, boxing, hill sprints, skateboarding – activities I love. I still do bodyweight exercises though, especially for climbing. I would still do different pull-ups for strength and to warm up when it comes to my climbing.”

Jason says he has always been into healthy living apart from just two things – he loves a good beer and every now and then a cigar.

But because he likes beer, he always makes sure he eats lean meat and plenty of green veggies.

Jason Momoa: “You got to go out and do it for yourself.”