Mark Wahlberg is an American actor.

He had a rough start in life but managed to headline the musical group Marky Mark and the Funky Bunch.

It was later that he became a Hollywood movie star in the 1990s.

He hit rock bottom at the age of 16, from his life living on the streets.

He was jailed for 45 days in total for savagely beating a Vietnamese man. After that he vowed to turn his life around, devoting himself to bodybuilding.

He loved music and even recorded a debut album, Wildside, which went platinum.

His physique from his bodybuilding efforts also paid off and he signed a 2-year contract with Calvin Klein to model underwear.

The Workout Principles of Mark Wahlberg 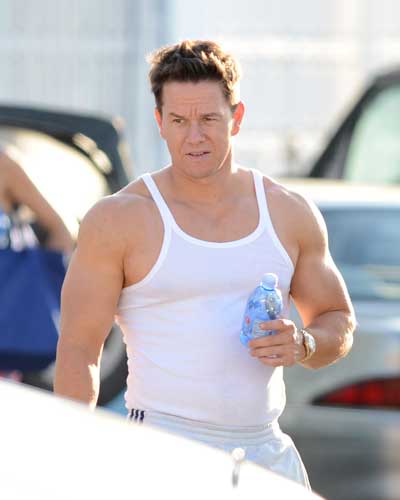 Mark Wahlberg has always had the penchant to keep himself toned. He does this with full-body workouts.

He will also supplement with more intensive days where he pushes heavyweights to maintain size.

He posts routinely on his Instagram page, as well as the stuff he does at F45. It was just a year or so ago that Mark did the F45 Challenge.

The benefits of the F45’s high-intensity workouts really showed on Wahlberg’s frame.

They show just how successful they were when Mark displayed the results on full social media. This was when he was filming the Peter Berg–directed Netflix movie Spenser Confidential.

Mark had promised Peter that he would get into the best shape of his life for him, and he did.

F45 is an 8-week program that combines meal planning as well as six 45-minute minute HIIT sessions every week.

It is aimed at helping people to achieve their bodyweight goals. It was around this time too, that Mark Wahlberg invested in the F45 fitness program which first began in Australia.

Mark’s abs should be plenty enough inspiration for guys to get off their butts and into the gym.

See Mark’s full-body workout which he used for his acting in Mile 22.

Mark’s workout routine isn’t only about lifting heavyweights. He likes to have a holistic approach to fitness.

His workouts will always start with Range of motion, Activation, and Movement Prep (RAMP).

Then he will perform some unilateral and bilateral strength moves.

He will always make sure to include certain drills for the lower body so as to promote agility and balance.

Mark also includes cryotherapy in his training program, as mentioned above. This involves sitting in a chamber – the temperature will drop down to around 150 degrees below zero.

A few experts advocate cryotherapy benefits, claiming it helps to reduce pain and inflammation. It also improves the quality of sleep.

For would-be followers of Mark Wahlberg workout, even though cryotherapy is generally safe, it needs to be discussed with your doctor first before trying it.

There are certain medical conditions that some people have that should not try cryotherapy.

Through Mark’s interviews and Instagram, he has revealed all that he eats in one day. He says his routine might vary at times depending on what the demands of his next movie are.

But whatever the schedule is for that particular movie, he will stick to the workout and diet plans.

He eats a lot, eating approximately 6-7 meals a day, and works out often – sometimes twice a day.

But he has a chef too, Lawrence Duran, who knows exactly what Mark needs according to each movie as well.

After filming the 2018 film “Mile 22,” we show you for example what was Mark’s normal schedule – it includes meals prepared by his chef.

This is Mark’s own line of supplements.

This drink contains whey protein and builds muscle. At the same time, it reduces hunger and food cravings.

He also has made a plant-based protein supplement drink for those people who do not have dairy.

Mark will take a turmeric supplement because it is an antioxidant as well as being anti-inflammatory – it helps to support recovery.

It is ensured that Mark’s multivitamins contain only natural ingredients.

Linoleic Acid is an omega-6 fatty acid.  It helps Mark to shed excess weight whilst retaining his lean muscle.

It plays an important role in heart health as well and also improves insulin sensitivity.

This supplement will have in it arginine, creatine, beta-alanine, green tea, and other nutrients. It will boost Mark’s energy levels to help him through grueling workouts.

(Branched-chain amino acids) help Mark to build muscle and to improve his performance at the gym.

It will also help to reduce his recovery time.

Other nutrients will also be found in the collagen Mark takes.

Mark makes use of this supplement.

It’s extremely popular amongst the Hollywood set who are always looking for ways to burn fat and lose weight.

Of course, Mark has recommendations, advice, and tips for those who want to follow his workout plan and diet.

He is one of the hardest-working stars in Hollywood. Here he provides his fitness advice:

1) All journeys start with the first step

If you have been slacking off, forgetting to focus on your health, or working out, he advises that you just have to throw yourself into it and get started! He says starting small is key.

You will wake up the next day feeling tired, but good about yourself.

2) Switching things up helps to make improvements in your fitness

Mark says it’s not always enough just to have a routine.  You want to be sure that your workouts are dynamic.

Mark Walberg says that he is always conscious about what is and isn’t right for his body.

He says shocking his body and changing workouts helps keep him in top shape and make improvements.

3) Listen to your body

That means resting when your body when it needs it.

It is very important to keep on track with your health and fitness goals.

You cannot afford to lose momentum and then slip back into your sedentary lifestyle.

4) Be dedicated to working out

There are only a handful of people in Hollywood who have Mark’s dedication to working out.

Not many have the drive to, for instance, lose 10 pounds in five days to get ready for a role!