The 8 Best Substitutes for Nutmeg

Just the right dash of nutmeg makes for very tasty sweet and savory dishes by adding a rather spicy flavor.

This special spice that adds a unique flavor to baking pastries, desserts, hot and cold beverages, porridge, and cream or cheese-based recipes is grown from the dark evergreen leaf tree known as the nutmeg tree.

Say you’re making a delicious treat for the family and you realize that you are all out of nutmeg but it’s too late to run to the store.

So what do you do?

How about we take a look in your cupboards and pantry to see what nutmeg substitutes you have.

While nothing can truly replace nutmeg and its very distinct flavor, there are other alternatives that you can use when replacing nutmeg.

In this article, we will look at eight of the best nutmeg alternatives to replace that fragrant spice.

Nutmeg is a versatile spice used in sweet and savory recipes. It is an intense spice that comes in the form of a nut and must be grated or rounded for use.

You can find nutmeg growing in tropical areas, such as the Caribbean, and is indigenous to Indonesia, also known as the Spice Islands.

It comes sturdily encased in a hard shell that has to be cracked to get to the nut itself.

Additionally, unlike other nuts, nutmeg does not trigger nut allergies.

How to use Nutmeg

Once you have the nut, it is best grated and a small amount is used for flavoring.

If not, this normally deliciously rich aroma and flavor-giving spice could overpower the taste of whatever recipe it is used in.

The saying a little goes a long way applies here.

In order for this ‘hard to crack nut’ to become a treasured ground nutmeg spice, it has to be sun-dried until the nutmeg seed begins to rattle inside the hard shell.

The Origins of Nutmeg

The nutmeg, which is dubbed ‘black gold’ originated from the Indonesia island, and in the early 1800s was the center of many trade wars and massacres.

In the stores, nutmeg can be sold either whole or ground.

It can last a very long time if stored in an air-tight container and kept away from direct heat and light.

8 Substitutes for Nutmeg You Probably Already Have On Hand 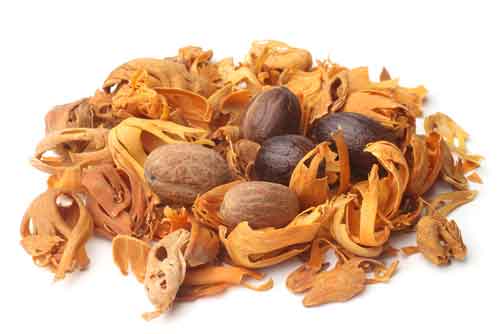 Both nutmeg and mace grow as one. On the outer layer of the hard shell is a reddish-yellow lace-like outer coating that is called the mace.

This mace is also used as a spice, but it is used separately from the nutmeg. Mace has a sweet flavor and can also be used as a nutmeg substitute.

In fact, for many, it is the go-to alternative that can be used at an equal ratio.

Although they are grown as one from the same plant, they are separated to become two spices with different purposes and also different flavorings.

In the absence of this strong and distinct aroma, below are eight spices that can substitute for nutmeg in many recipes.

These spices also add a range of flavoring from slightly sweet to intense spicy taste to many culinary dishes and beverages, too.

Like nutmeg, they also bring great health benefits to the table. 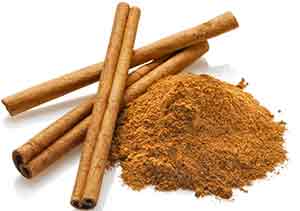 Cinnamon is a great substitute for nutmeg and has become the second most popular spice. It is native to the Caribbean, South America, and Southeast Asia.

Cinnamon is procured from the inner bark of a number of other bushes belonging to the Cinnamomum genus.

This nutmeg substitute can be had in powder or bark form and is one of those spices that are known for its quality medicinal properties.

Many doctors have lauded its use in food to combat type 2 diabetes, reduce the risk of developing heart disease, coughing, sore throat, arthritis, and fight cancer.

According to a study published by the Pharmacology Research Journal, cinnamon is said to be beneficial to improving fungal infections, influencing blood sugar levels, preventing Alzheimer’s disease, and lowering the effects of high fat in meals.

Cinnamon can be used in savory and sweet dishes, pastries, baked goods, and beverages to substitute nutmeg.

It has a warm, peppery flavor, and vanilla-like calming scent that smooths the sensory emotions.

Since cinnamon is not as strong as nutmeg, you can substitute it by adding a bit more cinnamon than the amount of nutmeg that the recipe calls for.

Are cinnamon and nutmeg the same?

Both cinnamon and nutmeg are spices; however, they are not the same thing. They are sourced from different trees and have their individual taste, flavors, and aroma. 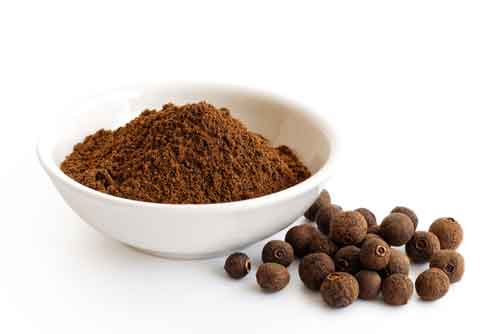 Allspice, as its name suggests, has a way of turning everything it touches into an instant tasty winner.

This native spice of the Caribbean and Central America is grown on a tropical evergreen pimenta dioica tree and picked when they are unripe and dried berries.

This is another good substitute for nutmeg and it can be used sparingly or in large amounts, particularly with meat such as chicken or pork.

Allspice tastes kind of bitter and fruity and has an aroma of the combined scent of nutmeg, cloves, and cinnamon all infused together.

Allspice contains antioxidants, anti-inflammatory, and antiviral components that help the body to neutralize free radicals and improve the symptoms of autoimmune disorders.

It can also be used as a brew in tea to aid nausea, prevent infections, and ease menopausal symptoms.

To substitute allspice for nutmeg, you can use equal amounts. Therefore, if the recipe calls for 1 teaspoon nutmeg, you should use 1 teaspoon allspice. 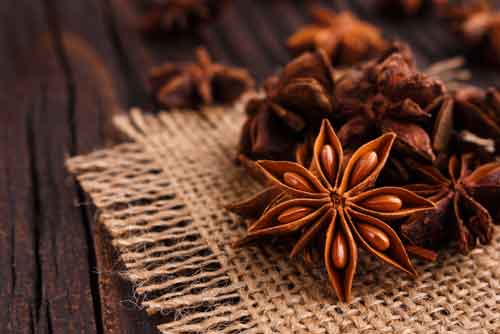 Star anise is named after its star-shaped pods.

It comes from the Chinese evergreen tree, illicium verum. Star anise is to be used in small quantities or it could overpower the food.

It is believed to be a key ingredient in traditional Chinese medicine.

Some benefits are its antiviral capabilities, inhibition of bacterial growth, and presence of antifungal properties.

When steeped in water to make tea, it aids in respiratory infections, nausea, constipation, and weight loss.

It is a favorite ‘go-to’ spice for Indian and other Asian cuisines.

When used with other spices it is great in garam masala and biryani. Star anise has a spicy yet mild licorice aroma.

To substitute star anise for nutmeg, you can use the same amount of star anise as nutmeg that the recipe calls for. It is good for either a sweet or savory dish.

Whole cloves are the dark nail-shaped dried flower buds from the clove tree.

This spice adds a unique flavor to soups, meats, stews, sauces, ketchup, beverages, rice, and other savory dishes. It helps to complement and enhance their flavors.

It can be used whole or ground.

Cloves have a strong bitter and hot taste and are full of health benefits. I actively fight against diabetes, cancer, obesity, and free radicals.

When using cloves instead of nutmeg, use half as many cloves as the recommended amount of ground cloves. 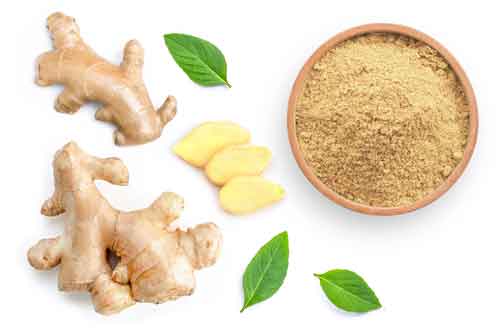 Ginger grows as a root plant and can be used fresh, dried, or in powder form.

It is widely loved for its medical benefits and added flavor to foods, such as desserts, meats, soup, curry-based foods, hot and cold beverages, sauces, and pastries.

An article published by the National Center for Biotechnology Information states that studies have shown ginger’s promising preventative properties against chronic diseases, such as hypertension and chronic heart disease.

Use ginger to replace nutmeg in recipes 1:1 ratio. That means substituting it at an equal amount or the same quantity. 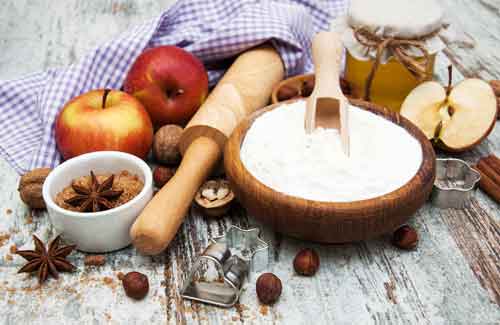 Apple pie spice offers amazing flavors to desserts, pastries, and cereals.  Because of the individual health benefits that each ingredient has, this spice is loaded.

Use half the suggested amount of apple pie spice when substituting it for nutmeg. 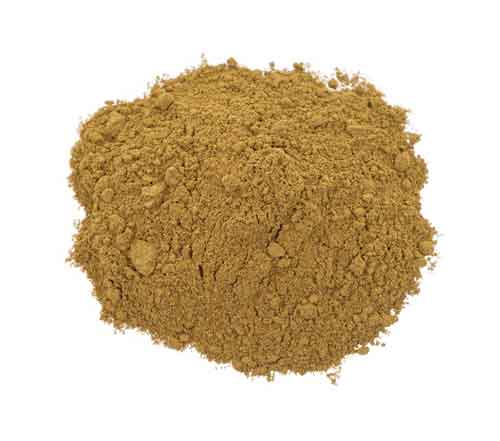 Pumpkin pie spice is quite popular during the Thanksgiving holiday season and is similar to the above, except that it contains cloves (which give off a stronger taste) and none of the optional ingredients.

Pumpkin pie spices are believed to be good for vision, immunity, and cell division. The individual ingredients all lend support to their unique benefits to the combined spice.

When using pumpkin pie spice as a substitute for nutmeg, you can use a 1:1 ratio.

The versatility of nutmeg is seen in the use of its outer coating, mace, as a separate condiment, as well as its ability to add flavor or garnish to a variety of culinary dishes.

Nutmeg also plays an intricate role in being key ingredients in a number of other flavor spices.

While it may not always be on hand, there are other great substitutes for you to choose from, many of which are right there in your home.