Arnold Schwarzenegger is a famous Austrian-American actor, gaining huge fame for his bodybuilding skills and movies.

Later, he even became the governor of California.

Arnold’s father used to beat Arnold, pitting him in fights with his brother.

Arnold would be ridiculed for having dreams of becoming a bodybuilder. Both his brother and father died in 1971 and 1972 respectively.

Arnold ‘escaped’ the trauma, turning to movies, particularly those of Reg Park, who was a bodybuilder and former Mr. Britain.

Arnold always longed to go to America, and he achieved this through Joe Weider.

This man was the man behind the International Federation of Body Building. 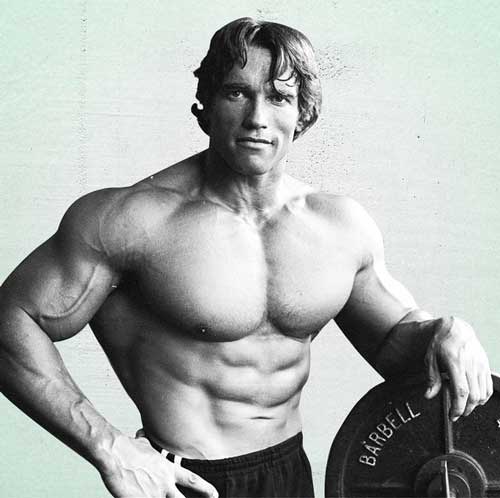 1) Train according to your training age

Your training age is totally different from your biological age.

It is all about how many years you have spent in the weight room.

Everyone has different load handling abilities, genetics, and recovery abilities. You need to train as to how your body feels.

Arnold was the first bodybuilder who swore by this technique.

It’s all about focusing your attention on the muscles you are training.

Even though he said you shouldn’t be chasing the pump all the time whilst training, there’s definitely a place for it.

Pumping is achieved when the trained muscle is filled with blood.

Arnold would say that if you have weaker body parts that are lagging behind, pay attention to those muscles.

Arnold had a training method and style that was called volume training.

This would include high numbers of repetitions and sets for just about every exercise he was involved in.

He believed that the more time the muscles spent under tension, the more they would grow.

He used to train twice a day in Venice at a gym called Gold’s Gym where all his closest friends would join him – some were bodybuilding icons like the late Franco Columbu, Dave Draper, and Frank Zane.

His workouts used to last hours.

These included endless numbers of exercises and sets.

These exercises and sets were the epitomai of high-volume training.

Many training experts today criticize this way of training because it is thought it does not allow for sufficient muscle recovery. Arnold knew exactly what he was doing.

Plan A would be on Mondays, Wednesdays, and Fridays

Plan B would be on Tuesdays, Thursdays, and Saturdays

Would be the same as Mondays, Wednesdays, and Fridays

Would be the same as Mondays, Wednesdays, and Fridays

When he was in his prime, Arnold would eat five to six small meals a day. He would supplement with protein shakes.

He would consume around 3825 calories per day.

A lot of it would get burned at the gym. Back in his early days, he would eat a lot of animal-based protein, but now he is 99% vegan.

Arnold would work out between his snack and the next meal

One top recommendation of Arnold’s is that people purchase his book, Arnold’s Bodybuilding for Men.

The legendary bodybuilder shows men how to build and maintain an excellent proportioned and well-conditioned body. This will promise them a lifetime of fitness and health.

For men of any age, Arnold shows them a step-by-step exercise program and diet.

But women can weightlift too, of course, says Arnold.

You can be a winner too if you follow his outstanding workout routine, principles, and diet.

Arnold Schwarzenegger – “Failure is Not an Option”