Already at the age of 13, he was studying wing Chun Kung fu.

He was a student of the renowned wing hun master called Yip Man.

At 18, he went to America and achieved a degree in philosophy.

Then he started teaching Kung Fu in Seattle, opening his own school. He named it the Jun Fan Gunge Fu Institute.

He also developed his own martial art, calling it Jeet Kune Do.

If you translate that to English it means the way of the intercepting fist. Bruce was devoted to physical culture.

Unfortunately in 1970, he picked up a barbell weighing 125-pounds, injuring the fourth sacral nerve.

It must have been shattering news for him to hear that he would never do Kung Fu again.

But being Bruce Lee, he created his own recovery program. He started walking again, and gradually built up his strength.

He started making movies again, showing his brilliant martial skills in famous movies such as “Enter the Dragon” – a movie he never got to see because he passed away before it hit the theatres; a movie which made him so famous.

Bruce Lee was someone who was driven by fitness

This was a guy whose training helped to expand the boundaries of his physical abilities.

Being a martial artist, he had many levels of fitness that made his skill set so well-rounded.

Fitness is all about improving the systems of the body; he knew this.

So he used different types of fitness to improve his performance.

He realized that practicing wing chin on the wooden dummy or even practicing the first form for hours wasn’t going to produce the adaptations his body needed to develop an edge over his competitors.

He adapted his training regimen to such a degree that the last 3 years of workout principles were unrecognizable to those of the 5 years before that.

His mission was cross-training, weight training for strength, running, and cycling for cardiovascular efficiency.

He would stretch for flexibility, use heavy bags for timing and applied power.

One of the main principles of Bruce’s training and above-average ability was strength.

He believed that for any sport or martial art, full range of motion and strength were the basis for success.

After this encounter, Bruce was determined to increase his strength of stamina, endurance, and muscular strength.

The words from Enter the Dragon say, “Sparta, Rome, the knights of Europe, the samurai…all shared the lone ideal: the honor of strength, because it is strength that makes all other values possible. Nothing survives without it. Who knows what delicate wonders have died out of the world for want of the strength to survive?”

With strength as his foundation for physical performance, resistance training became the natural option to increase this area. 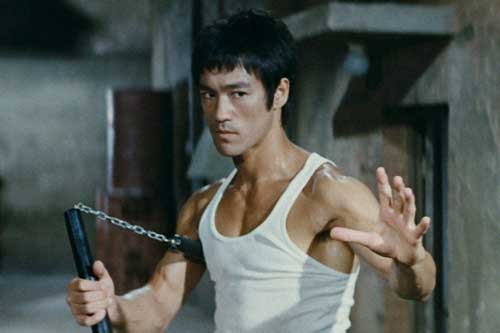 If Bruce were around today, he would no doubt be using the TFW methods for strength training, conditioning, and recovery methods.

Remember that Bruce was always training toward martial arts in addition to his physical training.

Let’s look at his past training methods program:

Bruce knew that warming up properly improved performance and decreased the chances of injury.

He suffered a back injury in his life which plagued him endlessly from not sufficiently warming up.

3) Then he would then do strength training

He used a variety of exercises to achieve this.

Back in Bruce’s day, he would do jump rope and roadwork – these were the golden standards in cardiovascular work for fighting the opponent.

Today, people would probably replace those methods with sprints and metabolic circuits to increase endurance.

His core strength was key to what made him so athletic. Check him out here.

He absolutely prioritized core training. He made a point of contracting all the muscles in his body to improve his mind-muscle connection and power.

There was no doubt that Lee’s physique was legendary, with almost perfect muscle definition.

He also believed emphatically in getting enough sleep and benefit from its restorative powers.

He saw to it that he got at least 8 hours of sleep each night. He would wake up at about 7 am and go for a jog.

Bruce Lee worked out a lot. It was Chuck Norris who said Bruce Lee was the hardest worker he’d ever seen – Bruce was “fanatical.”

Bruce’s wife also echoed these same sentiments. She would often say that he would work out all day, at times 7 days a week.

What we do know about Bruce’s workout sessions was that he usually spread them out over 3 hours each day.

They would start with a run in the morning and continue late into the evening.

Below we show you an example of Bruce’s weekly workout routine:

She shared the Bruce Lee workout that she had found amongst her late father’s possessions.

Other than Bruce’s close family and friends, not anyone really knows for certain what Bruce Lee ate on a daily basis.

Based on some books and anecdotes, the below kind of principles was what he followed through with:

There is not a whole heap of information about Bruce Lee’s diet, but we know that he was strict about counting calories.

He certainly knew what he was putting into his body. He tried at all times to avoid eating empty calories.

Bruce Lee’s family says that Bruce used to take a variety of minerals and vitamins.

Even though he ate a balanced diet, which provided most of his nutrition, he still took supplements to give him that extra boost.

What he took was…

Bruce used the below philosophy when it came to his workouts:

“Don’t allow your goals to be superficial. Think deeply about your motivations, and pursue them in ways that elevate your performance. Accept what is useful, reject what is useless, and add what is essentially your own, and apply it to your workout.”

Can we end with a very positive recommendation from Bruce Lee?

“You must see clearly what is wrong. You must decide to be cured. Speak so as to aim at being cured. You must act. Your livelihood must not conflict with your therapy. The therapy must go forward at the staying speed. You must feel it and think about it incessantly. And learn how to contemplate with the deep mind.”

Bruce Lee – The Legend. The Dragon

‘Considered the greatest martial artist of the 20th century, or of all time’