There are not many guys who have had such an amazing rock-solid career as Dwayne Johnson.

It’s no wonder this guy, so famous in the wrestling world, was dubbed “The Great One” and “The People’s Champion”.

Dwayne Johnson rose to fame as a popular wrestling personality.

He became known as The Rock.

Later, he became a box-office star.

He appeared in movies including ‘The Scorpion King,’ ‘Hercules’ and ‘The Fast and the Furious” franchise.

Not only wrestling, but his movies have raked in at least $10 billion across the world! That’s ‘Dewey’ for you, also dubbed the “Most Electrifying Man in All of Entertainment.”

Can you believe this powerful wrestler also graduated from the University of Miami with a bachelor of general studies in physiology and criminology!

Dwayne’s grandfather and his dad had both been wrestlers.

Dwayne followed suit, becoming one of the greatest professional wrestlers of all time.

For eight years, he wrestled for the World Wrestling Federation.

When his movie career took off, he stopped wrestling in 2004.

Here are a few more prominent ones

Read here about all the nominations and winning awards he has collected over the years. 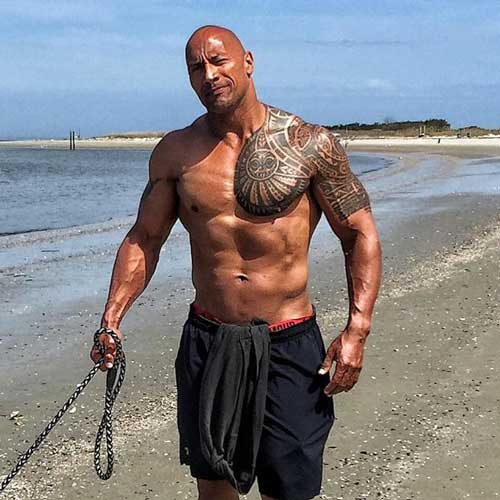 You need to become disciplined like never before in your life if you want to look like Dwayne Johnson.

He is a very busy Hollywood star in many hard-core action movies.

These take a toll on the body.

Things he never compromises on though are his diet and his workouts.

These are his workout principles:

1) If you don’t love the pain of working out, forget it

You have to enjoy working out from your heart.

Take it from The Rock himself, “Working out is my therapy, and it’s cheaper than a shrink. I can’t imagine my life without training, honestly. Working out anchors my day. For me, training is my meditation, my yoga, hiking, biking, therapy all rolled into one. I love it.”

You won’t achieve what Dwayne has achieved if you aren’t disciplined to work out 6 times a week for 90 minutes a day.

2) The early bird catches the worm

Dwayne Johnson says he usually gets around 3-5 hours’ sleep each night.

He says he loves putting in hard work as early as possible.

He told Bodybuilding that he likes to get his day started on the right footing mentally and physically.

3) Warming up takes longer than the entire workout

If you love to sleep late, forget the Dwayne Johnson workout program.

He gets up at 4 am every day and hits the road or the treadmill for his cardio-hour warmup.

He’s been following this daily ritual faithfully for the past few years.

4) Be prepared to lift stuff hard, often, and heavy

This is the most important portion of Dwayne’s workouts.

Usually, he will do four sets of each exercise as seen below, with 12 repetitions on each set. He will take 60-90 seconds rest in between.

Dwayne says anyone who follows his program needs to be mentally prepared. It’s the progressive overloading of weights that makes the muscles grow.

Dwayne usually makes use of the pyramid-structure way of training.

It’s a weightlifting routine where you start with high repetitions and low weight.

It is important to maintain form in every repetition.

Then as the weeks pass, you increase the weight while reducing the number of repetitions.

6) High reps for arms and biceps

George Farah, Dwayne’s trainer says lots of people do isolation exercises for arms and biceps in the wrong way.

He says the muscles in the arms are usually small and will get burnt out quickly if you train them with massive weights.

You want to train your biceps and triceps with high intensity and proper form to have the right pump.

With his inability to do squats, he engages in other leg exercises like seated leg presses, lying leg curls, and the Smith machine lunges instead.

Dwayne Johnson treats himself once a week. No cheating was allowed on the other six days.

His type of cheat meal is 4 double-Pepperoni pizzas, 12 pancakes with syrup, and 24 brownies with a jug of milk!

Although Dwayne used to follow different workout plans at the beginning of his training, over the past few years his workout routine revolves around the traditional bodybuilding method.

The only workout principle needed to follow is that of continuous improvement and good form.

Everybody wants to have The Rock body of Dwayne Johnson.

It will take a huge amount of dedication and discipline to build a physique like his.

The guy who is behind the training of Dwayne Johnson is George Farah.

He is also Dwayne’s nutrition guru.

This training and workout plan does look pretty disciplined and tough, but that’s exactly as it is supposed to be.

So how does Dwayne Johnson get his bodybuilding physique? His conditioning coach, IFBB pro bodybuilder George Farah trains him.

To sustain his huge muscular body, he eats and drinks nearly 5000 calories a day. He will eat between 5-7 meals a day.

Check out his diet:

Although his diet varies depending on the kind of physique he works toward in a movie, it has plenty of fibrous carbs, starchy vegetables, and proteins.

And apparently, he loves cod.

If there is one person who can define totally body fitness, that person would be Dwayne Johnson.

You don’t get that body, the arms, legs, abs, and pec, for nothing.

Here are the 5 philosophy tips that he recommends:

“With drive and a bit of talent you can move mountains.” – Dwayne Johnson – The Rock