Gal Gadot is from Israel – she is a singer, actress, model, and artist.

Before that, when she was around 18, she served her mandatory two years in the Israeli Defense Force as a sports trainer.

Then she started to study law but decided to try for the Miss Israel beauty competition in 2004, which she won.

She dropped law and started her modeling and acting career.

She had to be pretty fit to be Gisele in her movie debut of the Fast and Furious.

In 2013, she was Wonder Woman in the Batman v Superman: Dawn of Justice movie.

But it was in 2017, she made her solo film debut in Wonder Woman.

Even though she spends some time in LA when she is filming, she primarily still lives in Israel with her husband and kids.

She does have a house in Hollywood Hills, though, for when she is filming. 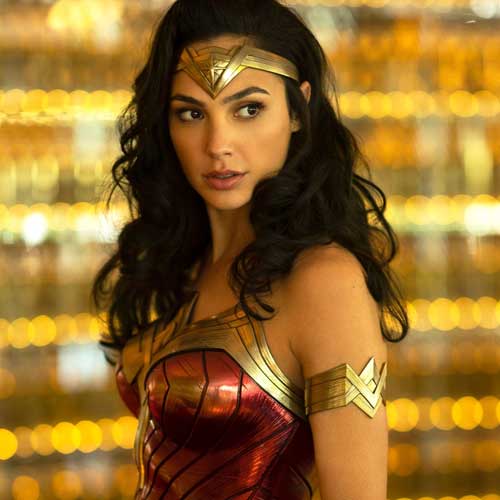 National Board of Review, USA

Wonder Woman’s Gal Gadot was quite a sensation when the movie was released. In the movie, Gal plays an Amazonian warrior, Diana.

Naturally, women when they saw Gal in the movie, wanted desperately to find out how they could gain muscle and look like Wonder Woman.

You can achieve it, too, if you are prepared to work really hard for 9 months as Gal did.

She put on over 12 pounds of muscle to achieve the Amazonian goddess-like physique.

The look of Wonder Woman is one with a slim, firm waist, shapely buttocks, and a toned bust – wow, who could not admire that!

How not to get the body you have been looking for…

Doing the above can well help you to lose weight.

But if your dreams are to get the look of Wonder Woman, curvy and muscly in all the right places, you will have to work at putting on some muscle to get curves in the right places.

In fact, you will need a completely different training and nutrition program.

To do this, Gal enrolled the expertise of Mark Twight and Thomas Bradley from Gym Jones to help her build the Wonder Woman body.

Her training principles were cardio combined with weight training.

Getting the body of Wonder Woman required Gal to go to the gym for about an hour a day to work out.

However, getting enough sleep and proper nutrition was essential for recovery and progress.

The other 23 hours of the day are equally as important.

When she started out, Gal could not perform a single pump

Gal incorporated the principles of progressive overloading to build her strength.

By the end of her training program for the movie, she could perform multiple push-ups and pull-ups quite easily.

She also trained her abs by strengthening her abdominal muscles.

The goal of Mark Twight and Thomas Bradley was to change Gal Gadot’s body from what she was, a beauty queen and model, into what they wanted her to become – Wonder Woman!

It is coupled with some cardio, combining heavy lifting and bodyweight exercises.

Each workout lasted about 45-minutes to an hour.

WEDNESDAY: pectorals, abs, and back

In an interview with Shape, Gal revealed to them what her exact diet was that she followed to maintain health and fitness.

Learn what diet she followed that allowed her to maintain her physique.

Magnus Lygdback, he was Gal Gadot’s nutritionist – worked with her to get her into peak condition.

In a YouTube video, he breaks down to viewers the diet plan he arranged for Gadot to follow while preparing to shoot Wonder Woman. He didn’t devise a highly restrictive diet for her.

His approach was to focus on high-quality nutrition for 17 out of every 20 meals.

When filming Wonder Woman, Gal would consume around five meals a day.

It means that in a four-day period, she could eat whatever she chose for three of the meals.

For the meal that her nutritionist suggested, Gadot had to ensure that her daily macronutrients were very on-point.

She had to avoid simple fast carbs.

This is because they have a higher impact on blood sugar levels.

She would be allowed to have two “snack-sized” meals during the day as well.

Gal didn’t necessarily have the leanest cut of beef you could find.

Magnus Lygdback was more concerned whether the food, for example, the proteins, were organic, grass-fed, or wild-caught, over their fat content.

Do you also want to try this diet of diet plan at home?

Magnus Lygdback offers a simplified method. This will ensure that you get the right amount of each of the foods you must eat: fist-sized portions.

For breakfast, for instance, you would eat a fist of protein and half a fist of complex carbs.

Your snack would be a fist of protein and a half a fist of carbs or fat.

For lunch, you would have a fist of protein and a fist of carbs, and two fists of vegetables. Dinner would be the same fistfuls as lunchtime.

He says about this, “The great thing about this diet is that you cannot fail,” he says. “You don’t have to have a guilty conscience.”

With the guidance Lygdback’s regarding her meals, here’s what Gal put on her plate in order to look and feel like a true superhero.

Magnus and Gal would spend at least an hour in the gym to start their day.

Her breakfast would consist of poached eggs, tomato, quinoa, and avocado.

By eating healthy carbs from the quinoa, it meant Gal’s muscles were able to recover and restock from the tough training sessions.

She also would drink plenty of water to stay hydrated.

She says that hydration is very important to her.  She says she would never start her day without drinking water.

She actually said she drank water like a camel.

Once she said, “I have a full, chilled bottle of Smartwater + Clarity before coffee or anything else”.

You might not even be aware that hers is the face of the water bottle brand that she swears by.

Gal’s mid-morning snack was quite a meal in itself. But it was one of Lygdback’s go-to picks before lunch.

Gal would have a small salad with tomatoes, cured meats, and seeds.

A favorite protein of Lygdback’s which he liked to serve to his celebrity clients was fish.

Gal would often see it on her plate for her midday meal.

Then there would be a variety of veggies as well.

Magnus would say: “You don’t have to eat just white rice and broccoli and chicken. The more creative and interesting you make eating well, the easier it is to stick to a healthy lifestyle.”

By the time mid-afternoon came around, Gal would need another energy boost.

Fish often took the center stage for her meals. So she would eat something like a mackerel salad with guacamole.

This simple meal of grilled mackerel, seeds, and a good dollop of guacamole would keep her empowered through the long, often tiring days.

Instead of fish, her protein would come from a piece of steak such as grilled ribeye.

As mentioned above, she also followed the Mediterranean diet

She has tested and tried this diet, knowing she would get the results she wanted from it.

She said she has always stuck with what she knows and believes in. If you want to try the Mediterranean Diet, you won’t be sorry.

It has claimed the top spot for diets for four years in a row now.

It is also a very healthy option for helping to prevent and manage heart disease.

People with type 2 diabetes and who are overweight also benefit from this diet – some say it might even be a better option than the standard low-fat diet.

As far as health goes, Gal says not only is her physical wellbeing important, but she is very mindful of her mental health as well.

She considered a good night’s sleep and yoga as absolute essentials to her.

Being a foodie, Gal says she cares a lot about how she fuels her body.

She ensures that she gets plenty of fresh and wholesome food – trying also to be a role model for her kids.

She tries to see that they also eat plenty of veggies every day.

To get in shape and keep her shape, she also ate plenty of vegetables and protein. Of course, she drank tons of water every day as well.

Helps to build muscle if you want to look like the Amazonian Wonder Woman.

Creatine is noted to help women to build lean muscle.

There are many supplements on the market that women can take.

Sometimes it can make choices rather difficult and confusing.

But BCAAs are not to be ignored.

They are essential amino acids and are the key to your workout success. Just a small scoop each day can improve your resistance and endurance.

BCAA will also help to enhance your muscle mass and shed body fat.

Did you know that Beta-alanine is already to be found in our bodies?

But sometimes you need to supplement it because it will help you to reach your goals of fitness faster.

Beta-alanine is a non-essential amino acid, and it comes from foods like fish, poultry, and meat.

It will help to improve your performance during exercise and reduce fatigue – that means longer sessions.

Gal Gadot knows all about staying in superhero shape – in fact, she is enviably fit to thousands of women.

She had an interview with Shape where she revealed exactly how and what she eats.

See below her recommendations to other women on how she looks after herself:

1) She starts her day with lots of water

That’s a very good habit to get into, drinking water to start your day in the morning.

This is because fresh, clean water will help to flush your stomach and balance your lymphatic system.

If your lymphatic system is stable, it keeps your immune system strong.

That will prevent you from getting sick.

To kick off her morning, Gadot follows an intense hydrating routine.

2) She follows the Mediterranean diet

She sticks to the healthy Mediterranean diet.

You’ve probably heard of this diet before.

It’s not really a diet-diet, so to speak. It’s a lifestyle choice.

This diet is more a way of thinking kind of diet – it’s about eating together, sharing foods, talking about food.

In 2010, UNESCO recognized the diet as an ‘intangible unit of culture’.

It never involves starving yourself. It’s simply a way of giving yourself and your family satisfying, nutritious meals.

3) She allows for some indulgences

Even though Gal does adhere to a healthy diet, she doesn’t deprive herself.

She will occasionally indulge in something she loves like a cheeseburger. But then she is quickly back on track with her diet and eating healthily.

She says when she keeps things healthy, she is “more vital.”

4) She tries to exercise every day

Even on her non-filming days, Gal liked to keep exercise a top priority.

During the pandemic, she still tried to exercise every day.

She knows, too, that exercise is important to help her maintain not only her physical well-being but her mental wellbeing as well.

She will rely often on her Headspace app to guide her through meditation sessions.

She also believes that getting enough quality sleep is very important.

She tries to avoid screen time as much as she can, and also to go for walks when she can find the time.

‘I’m a big fan of a good diet and healthy lifestyle. You have to eat a lot of vegetables, drink a lot of water, and stay active. I believe what we put in our bodies will reflect how we look on the outside.’ – Gal Gadot

This website uses cookies to improve your experience. We'll assume you're ok with this, but you can opt-out if you wish. Accept Read More