How Hammer Curls Can Help You Build Even Bigger Arms

To say this puts it succinctly would be an understatement.

This is because hammer curls deserve time in your workout, but are often overlooked for some of the flashier arm exercises.

However, this can be detrimental to your own progress, since it brings a lot to the table for really helping those guns pop.

Ready for some hammer action? 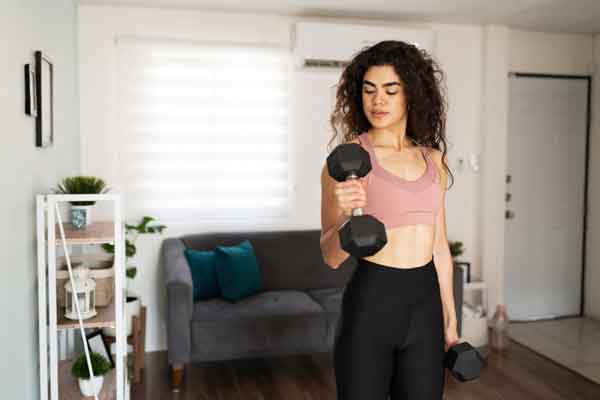 What Are Hammer Curls?

The name of this exercise is actually one of the most descriptive of all the exercise movements that exist, making it so you can easily visualize the concept.

If you’ve ever grasped a hammer in your arm before, this is the same grip position you utilize with this exercise.

Sometimes known as the dumbbell hammer curl, or even neutral grip dumbbell curl, so named because of the neutral grip (palms facing each other) you use when doing repetitions.

It is important to ensure that there is no wrist supination- that is to say, you do not flex the wrists throughout the movement since that transforms it into dumbbell bicep curls.

Hammer curls are not a substitute or replacement for the regular bicep curl.

However, its differences are enough to make it an excellent stand-alone exercise or an adjuvant to the primary lifts.

Here are a few reasons why you should be doing them:

1) Easy On The Wrists

Most people will never experience truly debilitating wrist pain in their life.

However, for people that do, being able to avoid putting stress on the wrists is highly important, making this a good option for them.

This is because unlike traditional bicep curl movements, where pain or discomfort may arise from wrist flexion that can occur, this neutral grip eliminates wrist pain since it places your two forearm bones in alignment with each other- there being no torque being placed upon them.

If you struggle with carpal tunnel syndrome or any sort of tendinitis this is an excellent choice to avoid unnecessary pain while working out.

Grip strength is important in our day-to-day lives but is also a great indicator of overall strength.

An easy way to improve your grip strength (and thus deadlift and perform other compound movements more effectively), is by training with the neutral grip on standard curl exercises- this will allow you to overload the movement without putting strain on the wrists.

The neutral grip position also takes a lot of load off of the front deltoids and the biceps brachii (front side of the biceps), which may enable you to carry a load for longer.

This is because most people in average health will never have an issue with the stability of their wrists, or only know about this once it’s too late.

The wrists need to be able to freely glide through all their planes of movement, not only free-handed but also under load bearing situations.

This might mean a push up, or just getting back up after a fall.

Because of the neutral grip, this exercise reduces the extent to which the wrist has to move. However, since you are doing reps- it’s not like your wrists are locked into place either.

Rather than supinate or flex like on regular curls, these stress the side of the forearm known as the ventral portion (the underside)- getting stronger in this area has been shown to actually improve wrist stability.

If you have a goal of holding a weight out in front of yourself for an extended period, the ability to resist flexion and extension forces will be important- something this exercise can help with.

All the aforementioned benefits aside, the fact remains that hammer curls are mainly employed for their ability to stimulate muscle growth and strength in the forearms and biceps, including the brachialis and brachioradialis.

It is widely accepted in the bodybuilding community that in order to maximize biceps growth, you must overload them with a variety of different movements.

When used as a part of a solid routine, hammer curls done towards the end of your workout serve the function of finisher well- to annihilate the arms and make it difficult to grip your shaker bottle.

Whoa, slow down there pony!

We know you’re eager to bust out the big guns, but let’s not put the cart before the horse just yet.

There is still proper form to master and techniques to get adjusted to.

If this is your first time doing the curls, just be sure to start with light resistance as you feel out the proper technique.

For the purpose of this explanation, we will use the standard dumbbell hammer curl as our point of reference.

What exercise program would be complete without variations?

Though the standard dumbbell hammer curl is the most popular variation, many others exist and bring something different to the movement.

Here are the most popular variations:

Most people don’t appreciate the benefits that seated movements bring to any exercise.

When the hammer curl is done seated, the range of motion is reduced.

This makes it easier to target the forearm muscles with less involvement from the larger upper body.

Another advantage of the seated hammer curl is that you do not need as much weight as when standing to achieve sufficient overload on your biceps and forearms.

This is partly because removing the leg and the need for strong core stabilization reduces the amount of resistance you need to use.

One thing to watch out for with this variation is that many people experience slight discomfort and sometimes even pain in their back (not lower back) when doing seated hammer curls, especially if they are leaning forward excessively or doing more weight than is reasonably safe.

Always reduce the weight in the seated position relative to the standing form.

Standing alternate hammer curls aren’t much different from the standard variation which uses both arms, except for one major thing- balance.

See, curling both arms at the same time poses issues relating to balance and proprioception.

The single-arm movement improves control of the weight and tends to reduce the risk of you falling over or getting injured in the process.

The incline increases the range of motion, allowing for more stress to be placed on the forearm muscles.

This variation is especially good for those with shoulder problems, often experienced by bodybuilders due to heavy bench press training.

The increased range also means that you more effectively target the long head of the biceps instead of the shorter head which is usually targeted with standing versions.

It also tends to be easier on your back because you are less inclined to lean forward which reduces strain on the lower back and allows you better control overbalance.

The rope pulley attachment offers a versatile alternative to dumbbell hammer curls, as it is easy on the wrists and allows you to adjust your grip width as desired.

This version is especially good if you are having problems getting into position with traditional hammer curls or have wrist problems.

It also tends to give better stimulation of the muscles because you can vary your grip at will.

This gives most people what they want from their workouts most quickly- results.

This variation is most effective when performed alternating for reps.

One of the simplest variations on hammer curls is to use the old fitness trick of grabbing a towel and wrapping it around your hands so that there is no gap between them when you curl.

This variation has one major advantage over standard dumbbell hammer curls- it allows you to focus all your effort on the biceps because it reduces grip strength significantly, forcing an increase in biceps activation.

See, many people find that they are relying too much on their stronger forearms when doing traditional dumbbell hammer curls which limit muscle stimulation in the arms.

Towel hammer curls force complete involvement in the biceps since there is no help from forearm muscles at all.

They can be done using any grip- palms facing in, out or each other for variety.

The crossbody hammer curls aren’t much different from standard variation hammer curls, but the change in angle allows for greater stimulation of the brachioradialis muscles.

Plus, this variation makes it easier to target the inside of your biceps which tends to be under-stimulated with standard hammer curls.

This is a good option if you have shoulder problems as it reduces strain on the deltoids.

The preacher bench attachment is extremely useful for isolating the biceps, especially the short head of the muscle.

Hammer curls work particularly well on this piece of equipment.

Using the preacher bench allows for the use of dumbbells, rope attachments or even cambered bars as long as the palms remain in a neutral position.

If all you have at home are kettlebells, you can make do.

Although not ideal, kettlebells can allow you to get impressive biceps too. However, wrist pain is a greater possibility to be careful

1) Use A Slow Controlled Motion

Hammer curls are not meant to be done with speed. On the contrary, the high rep requirement shows that it needs a higher time under tension.

Go slow on your reps and feel the muscle do the work.

2) Use A Full Range Of Motion

As with any curl movement, go through a full range of motion for maximum biceps stimulation.

The further you go down, the more your short head will be challenged, so don’t just stay in one place.

3) Use A Variety Of Grips And Angles

The wide variety of hammer curls is great because it allows you to use different angles and grips that target the muscles uniquely- especially important if you are looking for a change or have problem areas to focus on.

Using momentum to help complete your reps is not being smart or taking a shortcut as you might believe, but actually shortchanging your progress.

In addition to using momentum to swing the dumbbell or bar, you do increase your risk of injury by placing more torque on joints and muscles.

It is far better to go slow and focus on the muscle doing the work than to get sloppy.

Your elbows should remain tightly tucked to your side and should not move away from the body during hammer curl movements or you lose the targeted stimulation offered by the movement.

4) Use A Neutral Grip

This can lead to biceps tendonitis and elbow pain.