How Creatine Helps You Gain Muscle and Strength

According to a study from the United States, creatine supplementation increases athletic performance. Does this mean taking creatine can help in building muscle?

In this article, we will discuss what creatine is, its types, how it affects muscle mass, and other health benefits it can offer.

Creatine results from the combination of two amino acids, namely arginine and glycine. Interestingly, creatine is naturally produced in the body, specifically, in the liver, kidneys, and pancreas.

According to the Journal of the International Society of Sports Nutrition, among athletes and health enthusiasts, creatine, one of the sports supplements, is an effective way to improve physical performance.

Apart from creatine supplements, this amino acid compound is also consumed in foods and animal protein.

Furthermore, also based on the Journal of the International Society of Sports Nutrition, 95% of creatine is found in your muscles.

The stored creatine is also known as creatine stores or phosphocreatine.

As we all know, ATP is an energy molecule that is responsible for increasing your energy levels for muscle contractions. 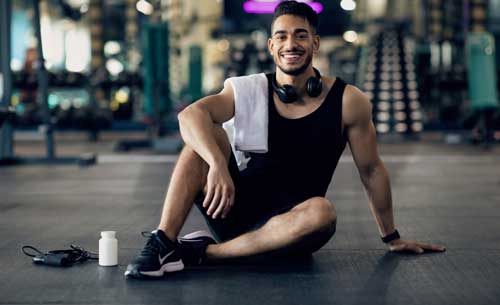 One of the reasons why bodybuilders take creatine supplements is because they want to increase their lean mass.

But, does a creatine supplement offer muscle-building effects?

According to a clinical trial from the USA, it was reported that creatine helps increase muscle mass and muscle strength better than doing high-intensity exercise alone.

This ATP production is one of the processes that can also build muscle.

In a report from Belgium, an increase in ATP production can lead to the formation of new proteins. As we all know, proteins are needed for building muscle.

Based on a study from Canada, taking creatine increases your growth hormone.

Eventually, this can aid in both enhancing healthy lean body mass and muscle growth. In this study, it was also reported that creatine reduces muscle breakdown.

If you have this condition and you exercise, you will only lose more muscle. In the long run, this can reduce your ability to train and work out efficiently.

In another study from New York, the muscle-building effects of creatine supplements or other sports supplements are not seen overnight.

You can observe changes within a week and when you do a high-intensity exercise again and lift heavier weights, that would be the time increased muscle growth and mass have occurred.

In a randomized controlled trial from Iran, how creatine increases mass is associated with muscle growth. In this study, creatine supplements can reduce myostatin.

To understand better, myostatin is a protein that inhibits muscle cell growth.

When you have much of these in your body, your muscle fibers are prevented from building new muscle as well.

If you are just a beginner in creatine consumption and you worry if this dietary supplement will show its effect, worry not because according to the study above, advanced weightlifters and beginners can increase their mass effectively.

But, it is important to always include proper training when you take creatine.

In a clinical trial from Belgium, it was reported that healthy adults who took creatine and did strength training were able to increase their lean body mass more than those who trained alone.

Types of Creatine for Muscle

There are different forms of creatine and each of these somehow offers different effects to lean mass.

In this section, we will discuss some of these and how they affect the body’s muscles in different ways.

Monohydrate is the most stable form of creatine.

Because there are many studies about this, many health enthusiasts prefer it over other forms.

In this study, healthy individuals were asked to take creatine.

One group is named pre-supp and the other is named post-supp.

The results showed that the effect of creatine monohydrate on fat-free mass is higher in those healthy individuals under the post-supp.

This simply means that supplement timing is also important if you want to increase lean mass better.

This phase will usually last for a week.

Then, you will move on to your maintenance dose.

It is important to know how much creatine is required for your body as too much of it can cause some adverse effects.

Compared to other forms, creatine HCl is more absorbable.

It increases muscular endurance the same way as others, but it only delivers small amounts of creatine to your muscles.

If you want to increase the creatine bioavailability of creatine, this form might be what you are looking for.

However, it delivers less creatine to your muscles.

So, even at high doses, creatine ethyl ester cannot saturate your muscles a lot.

Other Benefits of Creatine Supplements

Aside from improving your muscle health, the use of creatine also comes with other health benefits.

Some of these will be discussed in this section.

According to a study from Massachusetts, creatine helps regulate blood sugar levels.

It works by increasing the function of the molecule responsible for drawing sugar into your muscles.

In another study from Brazil, those who took creatine and did a high-intensity exercise after were able to reduce their blood glucose levels more than those who only exercised.

This means that creatine is a potential therapy for diabetes.

According to a study from Australia, participants who took creatine supplements for 5 weeks were able to score better on memory tests, even under pressure, compared to the placebo group.

Anxiety and stress are common, but if you are battling these mental health problems including depression, it is interesting to know that creatine supplementation can help you out.

In one study from South Korea, individuals with depression reported that they experienced an improvement in their symptoms in just 2 weeks after taking 5 grams of creatine based on body weight.

These improvements continued for up to 8 weeks.

Indeed, taking creatine supplements is an effective way if you want to build muscle.

Generally, many factors promote the build-up of new muscle proteins.

Eventually, this can lead to an increase in the production of muscle fibers that can build muscle.

There are three main types of creatine.

Among them, the monohydrate form is most preferred because of its stability.

Without one of these, muscle function improvement may not be seen.

What are the adverse effects of using creatine supplements?

Some of the side effects of creatine include dizziness, weight gain due to water retention, and gastrointestinal pain.

How much creatine is needed for an adult body?

The dose of creatine that you will use will depend on your body weight. Professionals calculate creatine doses by grams of creatine per kg of body.

What are the foods rich in creatine?

An animal protein like red meat is rich in creatine. If you want to increase your creatine levels without using supplements, you can consider tuna as well.