A double chin can cause a lot of distress, particularly as many people tend to look down on people because of their facial features.

Yes, we live in a shallow world.

However, most of the time a bit of fat under the chin is nothing serious at all.

Rather, it is a simple matter of excessive fat accumulation in an area also known as the submental space.

Indeed, it is often the result of being overweight or obese, but genetics also play a significant role in the development of this.

This is why some people may be of normal body weight and yet still have an exceedingly difficult time reducing fat deposits in this area.

It often is not that difficult to get rid of the fat in this area, but it does take the combined effort of exercise and diet to do so.

The good news is that all hope is not lost.

Let’s check out some of the most effective ways to get rid of those double chins for good.

How to Get Rid of Fat Under Chin Without Surgery 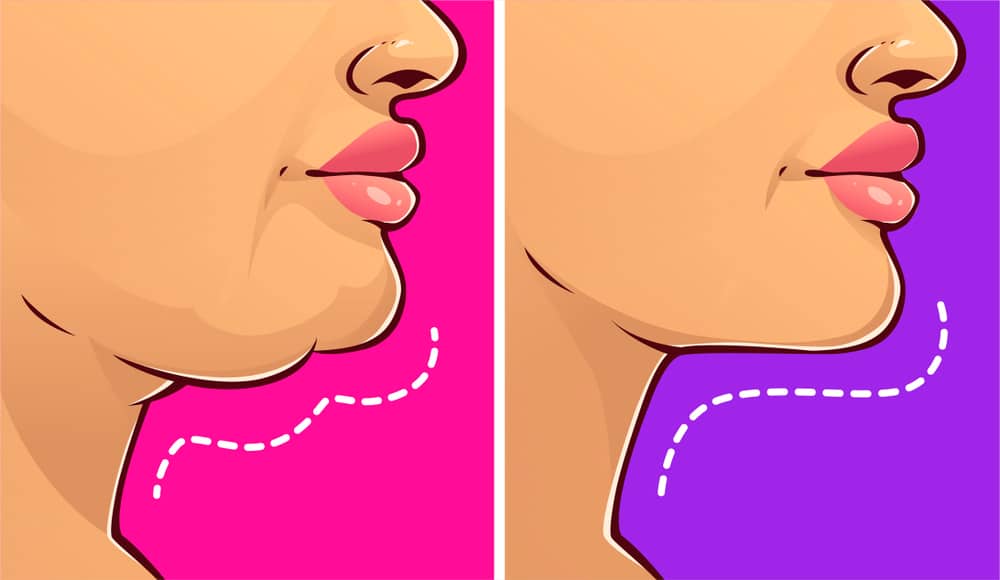 The majority of the exercises you will encounter when attempting to be rid of a double chin are extremely simple to do.

Most, with the exception of a few, require nothing at all to do except a movable neck and jawline.

Let’s take a look at what some of the best exercises are:

Chin To The Ceiling

One of the quintessential double chin exercises, it works by activating the muscles of the neck and jaw. To perform:

This exercise has a very unique name, helping you visualize what needs to be done. It is perfect to tone the chin. To perform:

This exercise, as the name implies simply involves mimicking the action of swishing the liquid around in your mouth.

Doing so helps to stimulate muscles of the lower cheek and chin, and is usually a staple when attempting to lose that double chin.

Chin Squeezes With A Ball Exercise

To perform this activity, you will need to get a softball to use as a prop, such as those used in physiotherapy.

This exercise helps to stimulate the neck muscles.

This exercise simply imitates the action of whistling, so there’s no excuse to not do it.

This exercise is not very well known, but nevertheless extremely useful for training the chin and lower jaw muscles.

This exercise can be considered a more difficult version of the one done with the physiotherapy ball.

You won’t get very far if all you do is focus on chin-specific movements and not much else.

The fact of the matter is the majority of people that do have a double chin are as a result of excessive fat.

A resistance training program designed to target all the major muscle groups will do wonders for improving the overall rate of calories burned by the body.

Resistance or weight training increases mitochondrial efficiency, which correlates to an increased rate of fat oxidation in muscle cells and excess fat usage.

A good beginner resistance training program can include the following:

Aim to do three sets of each movement a minimum of two times weekly. This will help ensure muscle growth is supported, and fat utilization is increased.

Cardiovascular exercise is the primary way to utilize a lot of calories in a short period of time.

You would be hard-pressed to lose any significant amount of weight, and hence, that double chin, without incorporating several sessions of cardiovascular exercise per week.

The key is to elevate your heart rate and keep it elevated for several minutes – usually 30 to 60 minutes per session.

There are many different exercises to choose from depending on your current fitness and comfort levels.

Biking, swimming, jogging, using the treadmill or elliptical trainer are all great ways to really get your calorie burn on.

To start, if you haven’t as yet, take a hard and long look at your lifestyle choices. Can you honestly say that you’re happy with them?

If the answer is no, then maybe it’s time to start implementing changes. Small changes often compound and lead to big results over time.

Here are some great and implementable tips you can do right now:

Eliminate soda from your diet – delivers tons of calories and generally unnatural sugars that overwhelm your body’s insulin levels and cause further problems.

If your sweet cravings are way too intense, start off with a 0 cal not as sweet sugar substitute, or better yet – green tea.

Tea is loaded with antioxidants and even helps moderately increase calorie burning.

Eat More protein-protein is a building block of muscle and plays a critical role in overall recovery.

You can exercise as vigorously as you want, but if you don’t supplement that with enough dietary protein, you will end up losing muscle in the process (which is counterproductive to weight loss).

Protein will also help reduce the appearance of excess skin.

This is one of the easiest ways to lose weight.

Eating protein with every meal can also be considered a sort of white-hat cheat since your body uses a large chunk of the calories that the macronutrient group supplies just for digestion and processing.

Drink more water – your water intake will most likely increase as you eliminate soda from your diet, but this is one of the most immediately implementable tips you can do.

Yes, soda is based on water, but nothing can truly replace the value of pure water.

Water will help to suppress appetite, and also supports the metabolism of the free fatty acids liberated during exercise.

Do not replace sleep with any other activity, as this is the activity responsible for ensuring that everything else performs at optimal levels.

Skipping sleep will suppress your metabolism, cause weight gain due to increased fat storage, alters hormonal activity, disrupts appetite and so much more.

At the bare minimum strive to get six hours per night.

When All Other Options Fail

Sometimes, because of genetic predispositions, all the exercise and dietary changes in the world will not fully eliminate the persistence of the double chin. In such cases, cosmetic procedures and techniques may be sought out.

Use of special massagers can help mobilize fats in the chin area to help you get rid of your double chin, increase circulation and enhance the tightening of the skin in this region which may lead to the appearance of a smaller chin.

They may also stimulate collagen production which naturally restores the youthfulness of the skin if your double chin is due to age, poor posture, and loose skin sagging.

Mouthpieces exist which help to exert minimal all-day long pressure on the muscles of the face and the chin, supposedly helping to stimulate muscle growth and fat utilization in these regions.

Lipolysis treatments are those designed to actually promote the digestion of fat, frequently in the form of an injectable containing deoxycholic acid.

A minimally invasive procedure that involves the use of a laser also exists, which achieves the same end goal.

Similar in nature to lipolysis, except that this also helps get rid of the stubborn fat cells altogether.

These injections are usually injected into a layer of fat known as the mesoderm while other lipolysis treatments are typically done only on subcutaneous fat.

Done via a laser, it is very similar to laser lipolysis except that instead of burning (or melting fat), it freezes it and its cells.

Cool sculpting is more often used for other parts of the body such as around the abdomen.

Generally not the preferred method of double chin reduction these days, it can usually be done in an hour or so but using a general or local anesthetic.

Bruising, nerve damage, and swelling after the procedure are very common and one of the reasons why people shy away from it.

Trying the chin-specific facial exercises can go a far way in helping you sculpt the defined chin and jawline you desire, and reduce the appearance of submental fat deposits that form the characteristic double chin.

You will notice that combining diet, healthy lifestyle habits, and an otherwise balanced exercise plan is the way to go.

In no time, you will start to see a difference in the way your chin looks.

Fat in the submental space does not mean ill overall health, but losing a few extra pounds is always good.

A discussion with your physician to provide medical advice and options is also advised before embarking on any weight loss type of program.