Hugh Jackman is an Australian performer, dancer, actor, and singer.

He started his acting career when he was just five years old as King Arthur in Camelot.

That led him on to take classes at the Actors Centre Australia and then further refining them at the Western Australian Academy of Performing Arts in Perth.

He turned to movies eventually and made his name in the Wolverine movies, his movie as Wolverine/Logan in X-Men (film series) which ran for about 20 years.

The series earned him a record in the Guinness World Record for “longest career as a live-action Marvel superhero”.

Heaps of other movies followed thereafter for Hugh.

National Board of Review, USA 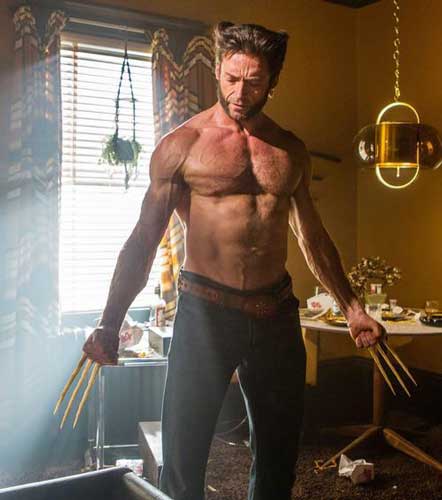 These are Hugh’s four workout principles:

Hugh reckons all fitness programs should use this principle.

To apply it, you need to make sure that you improve every time you walk into the gym.

Keep a workout log – but always move towards your goal.

The key is to have a plan where you get stronger and also stick to the plan.

You perform percentage-based strength at the start of the workout and for the main lift of the day.

Then the rest of the exercises in the workout should be according to the 2-for-2 rule.

This is another important principle of Hugh.

He says you will make more gains if you are accountable to something or someone.

Huge has a few; his trainer, his workout partners, and his job.

He says you need to take advantage of accountability so you can reach your goals.

It takes consistency and time to achieve the body you want to have. Hugh used the same exercises every week for at least six months. This helped him progress towards his goals. Stick to your pogrom and don’t hop from one program to the next.

That’s how he explained the training plan that he used for Hugh to achieve the rock-hard physique for Wolverine.

“From one workout to the next I’ll always have something new to add to the equation. Our sessions are based on established principles, but we’ll always try and bring new ideas to the table. And Hugh now looks the most ripped he’s been for any movie.”

The training program that Hugh followed was the “Wolverine program.”

It was designed by the trainer David Kingsbury.

All we can say is it helped Hugh to get lean and mean and gain muscle.

He did this with weight training, cardio, intermittent fasting, and carb cycling.

Five months before filming started; Hugh followed a very strict workout program for 6 days a week, plus his diet plan.

The Wolverine Program is made up of 4-week training blocks. These can be repeated with a 5-10% increase in weight every time the cycle is repeated.

This is how the 4-week training blocks looked:

If you want to start this program and look as ripped as Huge Jackman did, read more about it here.

The road to his transformation was long, and it required consistent hard work. In fact, at the peak of his training, Hugh was training seven days a week.

Every day he devoted over two hours to weight training and cardio workouts.

View David Kingsbury’s blog to find out all the specifics of Hugh Jackman’s workouts.

Remember, this program was made specifically for Hugh though.

It was meant to accomplish his goals and address his weaknesses.

Consideration was given to his timeline and the time he had available during each week to train.

Hugh exercised for more than 14 hours a week. That’s like having a part-time job – heaps of people won’t have that time to spend.

But you can still learn from his training and achieve his goals with his kind of physique.

View his underlying principles as your guide and apply them to your training.

While training for Wolverine, Hugh ate six meals a day and sometimes seven.

Mike Ryan stressed that it was only a template that anybody can adapt to their tastes.

“There’s no point in me saying, ‘You must eat this or that’. Everyone has their own likes and dislikes, and as long as you stick to the basic rules you can customize this plan to suit your own needs.”

The rules for Hugh Jackman’s diet