Krill vs Shrimp: What Are The Differences And Similarities?

Both shrimp and krill are usually used to produce supplements.

These marine animals are rich in omega-3 fatty acids that offer many health benefits.

But, how are these two different from each other?

In this article, we will compare the classification, anatomy, and habitat of these marine animals.

In marine life, different animals prey on one another.

When we talk about both shrimp and krill, these two marine animals come from different food cycles.

Additionally, these species are very important as they help support the rest of the world’s food chain.

These tiny crustaceans feed on plankton and zooplankton, and they become the food source of many large animals.

Interestingly, these crustaceans are also now processed for human consumption through supplements such as krill oil.

a.) Baleen whales and sharks

These two large animals are the most common ones that usually prey on small fish and krill.

Their upper hand is their large shells and bones.

b.) Sea birds and seals

According to the National Marine Sanctuaries, seabirds like auklets and sea waters, and seals find krill very important.

When these animals migrate and find none of these prey in their new environment, their ecosystem suffers.

Squids eat these animals by using their beak to break the krill’s crab shell. These animals can eat krill by up to 30% of their body weight.

So, how about shrimps?

How do these animals affect the ocean’s food cycle?

Also known as opossum shrimp, these animals are abundant in nature.

Its muscular part is what humans eat but, in terms of the marine food cycle, the whole shrimp is being eaten.

The preferred type of shrimp seahorses eat is called mysis.

Adult seahorses eat around 30-50 of these per day.

Dolphins are active marine predators and they can eat fish and shrimp up to 5% of their total body weight per day.

Shrimp is usually used as bait for catfish. Generally, the smell of shrimp is easy to be followed by these animals.

Although shrimp live with urchins, these animals prey on them. 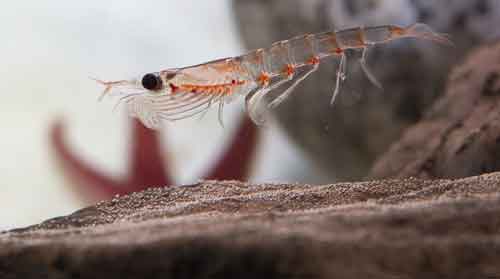 There are many key differences between krill and shrimp.

They differ in terms of their classification, anatomy, and behavior.

In this section, we will discuss some of these differences.

Generally, krill is smaller than shrimp. The former weighs around 0.07 ounces and may grow up to 2.4 inches.

According to the Australian Antarctic Program, some species of these animals can grow up to 5.5 inches.

Additionally, these animals increase their size by molting their hard shell and expanding the new ones.

When this new hard shell becomes tight, a krill will, again, expand it.

This means that the larger the krill means the older it is.

Interestingly, a krill can also reduce its size. Referred to as “downsizing”, a krill does it to use its body proteins as a source of energy.

On the other hand, shrimp weighs around 0.64 ounces and can grow up to 9 inches.

Many people refer to a prawn as shrimp but this is incorrect. Prawns are generally larger than the latter.

The morphology of krill vs shrimp also differs.

Additionally, the head and abdomen of a krill are covered by a protective shell.

According to a study published in the Ices Journal of Marine Science, these three segments determine how strong the krill is.

Generally, the bigger these three segments are, the stronger the krill is.

It also has around 6-8 pairs of legs on its thorax and 5 swimming legs called swimmerets on its abdomen.

On the other hand, shrimp comes in two segments.

These two segments are called the cephalothorax and abdomen.

Unlike krill, shrimp comes with a long abdomen.

Moreover, some species of these animals have a tail fan (double tails like fish).

Like a krill, a shrimp also has two pairs of antennae, compound eyes, and five pairs of accessory jaws.

In the krill vs shrimp comparison, the latter five comes with five pairs of legs.

The five legs are used for walking and the other 5 are considered swimming legs.

When comparing krill vs shrimp color, the former are transparent in most cases. Some come in red and pink pigment spots in their outer shell.

On the other hand, shrimp are bright and colorful.

They can also come in red, pink, and light brown.

Mantis shrimp, another species of this animal, comes in blue, green, and yellow.

Take note that the color of shrimp can vary depending on age and season.

According to a study published in the Journal of Northwest Atlantic and Fishery Science, the color of shrimps also depends on gender.

The female ones are reported to be brighter.

In terms of krill vs shrimp species, the former comes with 85 species while the latter comes with 1,900 species.

Shrimp can also lay a million eggs in just one season.

In terms of their lifespan, krill have a longer lifespan, around ten years. Meanwhile, shrimp has a lifespan of two years.

The lifestyle of these two animals differs as well. In this section, we will discuss the habitat and diet of krill and shrimp.

These animals, krill, live in salt water only.

Some reports say that the krill live in very cold water as well. Generally, they can be found in the Southern ocean.

On the other hand, shrimp lives in saltwater and freshwater. However, this depends on shrimp species. Take note that oil spills and pollution affect their habitat.

Shrimp and krill eat algae. Algae is rich in proteins that these animals can use as an energy source.

But, if we will be comparing these two, both of them do not only eat algae but also get their diet from different sources.

These single-celled plants are called phytoplankton. On the other hand, shrimp eat small fish, plankton, and aquatic plants.

Indeed, shrimp and krill are essential not just in the marine food cycle but in the human food cycle as well.

Although these animals are usually considered prey, they come with many differences.

These differences are in terms of size, morphology, body color, species, lifespan, habitat, and diet.

Still, there are some similarities between these two.

In terms of wellness, krills are used to make supplements while the other ones are used for cooking and flavoring.

Do shrimp snack on krills?

Even though these two are prey, although not haunted, shrimp also take krills as part of their diet. However, this depends on the shrimp species and where they live. According to some reports, it is hard for these animals to swim. Thus, when animals try to eat them, they cannot move properly.

Why are krills not considered shrimp?

Why do krills eat phytoplankton?

Krills eat phytoplankton because these plants contain chlorophyll that helps them thrive. Aside from these animals, phytoplankton is also eaten by fish, small sharks, corals, and whales.