Can you believe that Mike Tyson was only 20 when he became the youngest heavyweight champion in history?

That was back in November 1986, when he knocked out the 33-year-old Trevor Berbick, all in only five minutes and 35 seconds.

“I’m the youngest heavyweight boxing champion in history,” he told his manager, “and I’m going to be the oldest.”

Of all the 27 matches he had fought before facing Berbick, he had already knocked out 26 of them.

It was only in 1990 when he finally was beaten by Buster Douglas.

During his life as a boxer, he committed himself to a vegetarian diet, where he lost 100 pounds, saying that he had become vegan to give him the opportunity to live a healthy life.

He says all the bad stuff of his tough years of drug-taking and illness diminished with this lifestyle. 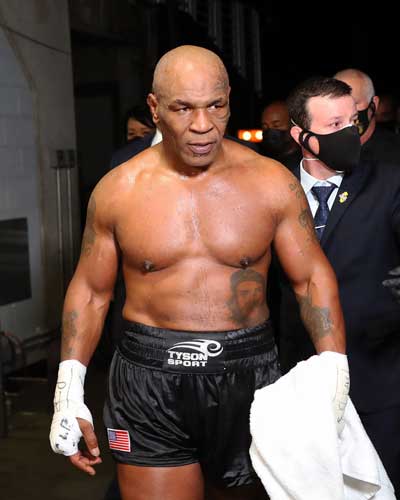 Mike Tyson was without a doubt the most feared and ferocious fighter that many have witnessed.

He believed in adding mental training to that as well; so well over 12 hours were dedicated to his craft.

He spent around 60 hours a week training and that’s more than some people spend at their office jobs!

All in all his day would look something like this:

Mike was in a reform school when D’Amato noticed him. D’Amato went on to adopt Tyson when Tyson’s mother died.

This would be where the boxer would make use of his hands in front of his face for more protection.

Tyson learned to prepare, visualize, and affirm victory through extremely tough training methods from his beloved trainer, Cus D’Amato.

Mike Tyson himself said “No one wants to get up at 4 and run in the pitch dark, but it has to be done.

The only reason why I do it so early is that I believe the other guy isn’t doing it and that gives me a little edge.”

It was this philosophy behind Mike’s career success.

He incorporated The Slip Bag and Heavy Bag in Tyson’s training methods – this gets the fighter moving his head.

Rooney would drill into Tyson the habit of evading counters after throwing power punches.

Each punch had a number assigned to it by both Tyson and Rooney.

They followed the numbers system when hitting the mitts in fights.

Mike Tyson was devoted to mastering his craft. He would spend at least 8-10 hours a day working out. He would study upcoming fights, ensuring he followed a rigorous diet to fight his opponent.

More of what Mike Tyson included in his workout routine:

Cus told Mike that shadow boxing was the most important exercise a fighter could partake in.

Mike would throw one punch for rounds on end to make sure it became perfect.

While shadow-boxing, he would move his head 2-3 times after each punch.

This was a conditioning workout to work on form, power, and combinations. Mike would get feedback from Cus after each punch and combo. To trick and distract his opponents, Mike’s favorite combo included:

The older Tyson became, Cus would increase the weight of the bag. It was rumored that the maximum bag Tyson punched was a 300 lb. punching bag.

There was no practice sparring.

When Mike sparred, it was real fighting.

Seasoned heavyweight pros would be brought in to spar with Tyson.

Many didn’t want to stick around because they were so damaging to them, but Cus made sure every sparring session was like the real deal.

Mike was an excellent counter puncher.

Read about his defense tactics.

Mike Tyson’s neck was between 20 and 22 inches, which is huge for someone his size. He achieved this neck with two exercises:

He did shoulder shrugs with barbells and did about 500 reps throughout the day.

Mike would do 400 squats a day before school.

There was one fascinating squat workout that he did was when he was in prison.

There are no weights required here. It is all about cards and squatting to pick them up.

Every time he squats down he had to pick up one card – a pretty intense leg workout.

7) He had mental training too

Mike says that “everyone was in shape” but that is not what made the difference in the ring.

Cus worked very hard to ensure that Mike’s mind was trained in both character and IQ. Mike would watch a lot of tapes of legendary fighters.

His style was created by vicious repetition.

It wasn’t genetics that made Mike Tyson perform and look the way he did.

IT was all about sheer discipline and a very grueling work ethic.

If Mike had not put in the hard work and effort which were so integral to his victories, it is possible he might not have been the legend he is today.

It was purely thanks to Cus D’Amato that Mike took his diet seriously, eating stuff like chicken and steak for protein.

He would eat oatmeal and pasta for his energy requirements and drink fruit juice, but no sodas.

He drank plenty of water.

If he did take in a snack, it would be like protein powder with about 6 bananas.

He did adore ice cream and cereals too, and when he retired, he changed over to a vegan diet which helped him lose 100 lbs.

Going on the vegan diet, his high blood pressure and arthritis disappeared.

Today he has gone back to eating meat.

What Mike would eat

What Mike would avoid

He stated, “The greatest gladiators, the greatest ones in Roman times, they were all vegan”.

He announced a comeback to boxing in 2020, but for this, he would again turn to meat products to bulk up.

As part of his training regime, Mike Tyson would take a vitamin supplement. He doesn’t reveal a whole lot when asked about his supplements, but this is what it is believed he takes:

Mike says every day Cus would put him under hypnosis and tell him, Mike, that he was the most ferocious fighter that God had ever created.

Mike literally visualized himself into the ring, and repeated his affirmations a few times a day – then you can expect the results to flow in.

Mike says that when a reporter asked him one day if he was worried about the likes of Evander Holyfield’s fight plan he retorted “Everyone has a plan until they get punched in the mouth.”

Adaptability helps you to learn from your experiences and develop new skills and make you stronger the next time around.

Everyone needs to be prepared to alter their plan if something untoward happens – be prepared.

“It doesn’t matter what anyone says about me. I’m a totally different entity to what other people think”.

And you shouldn’t let the past interfere with your successes either – don’t be misguided by what other people tell you.

Mike says if you want to dream big, don’t let others’ narrow-mind opinions bring you down.

Mike says “The lowest form of conversation is ‘was.’”.

What good advice his friend once gave Mike!

He told Mike that it is pointless to dig into the past – don’t let your history keep you from moving forward.

Keep living in the present tense, are Mike’s recommendations.

Check the people around you; your habits and lifestyle, and ask yourself if they are aligned with your goals.

After all, he says, breaking up might be hard to do, but not if it leads to a better you.

If you want to be a good fighter, you have to have qualities to do it, like self-sacrifice, discipline, and the ability to absorb some mental, physical and emotional punishment.

When he was interviewed by Men’s Journal, Tyson said, “To make space for the things you want in life, you don’t have to be a fighter, but you’d be wise to have a fighter mindset. You may not end up with a gleaming belt around your waist, but you’ll have something more: the satisfaction of having entered the ring.”

Isn’t that awesome advice from the great Mike Tyson?

P.S.! Mike Tyson has already confirmed that in 2 months’ time, in September 2021; he will be taking on veteran Lennox Lewis.