Ryan Reynolds is a Canadian actor, film producer, and comedian.

When he was 15-years old, he appeared in the series, Fifteen, all 65 episodes.

Thereafter, he was in a whole series of other television movies.

On a night, he met up with a fellow Canadian actor, Chris William Martin. They left for LA, California, but it wasn’t plain sailing for them.

Only in 1997, he got a role in Two Guys, a Girl, and a Pizza Place which was renewed for a second season.

It led to some other film roles for Ryan.

He was in three Marvel movies:  Blade: Trinity, X-Men Origins: Wolverine, and Deadpool

You can imagine he needed to get pretty ripped-looking for these movie roles. 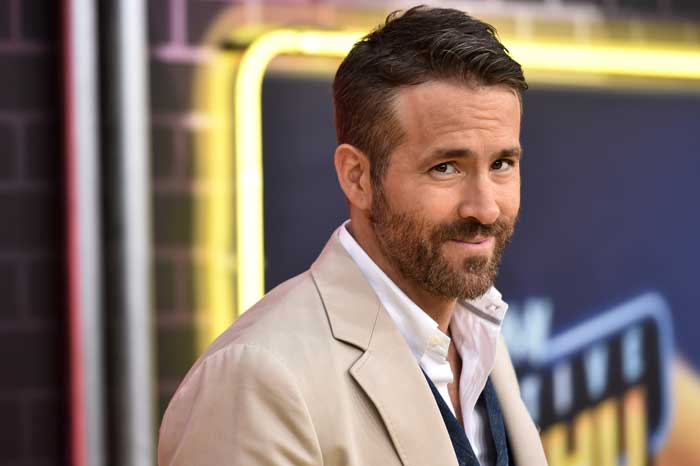 He has a naturally slim build, moving very effectively with his good-looking bod.

The main principle behind workouts for Ryan is nutrition – because that’s the most important part of building his physique.

For instance, for his roles in Blade: Trinity and Deadpool, he had to pack on major muscle and gain 25 pounds in like about 3 months.

He ate around 3,200 calories per day along with 6-7 days of working out each week.

If he was ever asked about his stunning physique, he would say, “I attribute my results mostly to nutrition”.

Naturally, his results would have been from not eating junk, basing his diet on high protein foods with plenty of veggies.

There’s no doubt about it; Ryan Reynolds has achieved great heights with his body.

When he knew he was going to play a superhero in Deadpool, he flexed up his body to get the ultimate ripped look – toned and muscular arms, biceps, and pectoral muscles.

It wasn’t all sunshine and rainbows for Ryan though.

He got his ‘look’ through sheer determination, discipline, and skill. In an interview with Muscle and Fitness, Reynolds admits that before he had his transformation, he ate and drank just what he wanted.

But in 2004 he knew he had to take his fitness and health seriously for Blade: Trinity.

He was told to muscle up. So for 3 months, Ryan had six daily workouts.

Each of these workouts would be 2-3 hours. He would start with 500-1000 sit-ups and then include heavy weights to bulk up his muscles.

He had to focus more on weight training to beef up.

This included different exercises at 8-12 reps.

Ryan always based his workouts on what the film needed him to be. All his workouts served two purposes – to give him strength and energy and also to make him look good.

Even though Ryan knows he looks so good, it is not only the aesthetical side of it that counts.

Performance is the most important factor when you look at him in his workouts.

To look like “wow!” for Deadpool 2, Ryan and his trainer Don Saladino created a full-body circuit workout plan.

This enabled him to function as a superhero.

If you want to train as Ryan Reynolds did for Deadpool 2, here is what you have to do for the day:

Ryan’s workout is a circuit. This means he does one set of exercises to complete one round, with limited rest.

To get the look of Ryan, do what he does and that is to perform five rounds of the full-body circuit.

A round of carries – carry the weight that you are able to, using the kettlebell.

When you have completed the workout, you can finish off with more conditioning work to elevate your heart rate.

For instance, do 10 minutes on a stationary bike or treadmill at a moderate pace.

Remember to finish off your day with some very good sleep.

Check out this type of day for Ryan:

The only downside to his diet is that Ryan is big on protein bars and shakes.

Both are OK, but they don’t offer the same nutritional value as whole foods.

Apart from his strict diet, Ryan uses these supplements:

And being found naturally in muscle cells, consuming it helps your muscles to produce energy when you are doing high-intensity exercises, actually improving your exercise performance.

It benefits bodybuilding because it helps to repair torn muscles, preventing any further damage to the muscles.

CLA helps to inhibit fat cell production and fat storage. It also boosts your energy levels, allowing you to burn more calories when you are working out.

For those who are dieting, it also helps you to feel fuller for longer.

This product is taken by all athletes and bodybuilders, etc. because it works to improve your performance at the gym. It’s because it offers your body the necessary protein and amino acids.

We all know that protein is the building block for increasing muscle growth.

Multivitamins contribute to stronger muscles and better energy. They are also very helpful in controlling anxiety and stress, and slowing down aging.

“I don’t expect success. I prepare for it” – Ryan Reynolds