A Hike In A Beautiful Place With A Great Person: Wellness Pioneer Michael Stusser 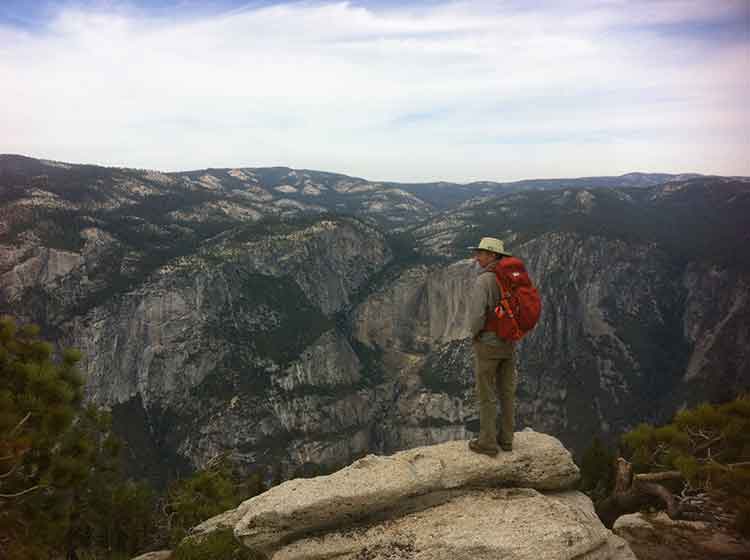 I’m hiking at almost 8,000 feet, an elevation that is straining my east coast sea-level lungs.

Before you proceed, please check out Mind Lab Pro reviews to get a fuller understanding of this article.

We’re at a brisk pace and I should be doubled over, but the conversation and the scenery are working hard to distract me—and they are doing their job well.

We are in majestic Yosemite National Park where the mountains rise from the valley like ancient deities and the ecology and geology are one of the most dramatic displays of the natural world I’ve ever seen.

An equally compelling and spiritually grounded subject is my hiking partner, Michael Stusser: organic gardener pioneer, health and wellness innovator, spa-owner, master of fermentation, Zen practitioner, and co-conspirator in the sustainable spa movement among other things.

I’m at the 8th Annual Green Spa Network Fall Congress and while many parts of this gathering were very inspiring, my hike with Michael was a genuinely moving experience filled with lessons that are still resonating with me.

Hiking at its best is a deep conversation with the natural world.

Footsteps consult the earth’s topography, breath is exchanged with the surrounding plants, eye contact is ever-present with views that seem to reflect back a sense of true self.

Yosemite is hiking at its best.

I’m part of a large group of Congress attendees that has embarked on its way to Sentinel Dome via Taft Point. A small group of us stops for lunch.

Mimicking the depth of our exchange with the trail’s ups and downs, we begin to talk.

Michael brings up the subject of healthy food and we all quickly launch into the complexities and problems plaguing our modern food system.

How can we ensure that all Americans have access to healthy, affordable, and safe food?

When it comes to answering these questions, Michael is the sage. He’s no recent kale convert.

He’s been living this lifestyle for decades as an integral part of the food movement vanguard.

I learn that he and his roommate, John Powell, were there at the conception of Allan Chadwick’s first gardens at UC Santa Cruz in the summer of 1966.

Chadwick is arguably one of the forebearers of the organic movement and these gardens have grown into UCSC’s Center for Agroecology & Sustainable Food Systems–an undisputed leader in education and the hands-on practice of sustainable and regenerative agriculture.

After studying intensive horticulture production under Chadwick, he spent ten years growing produce professionally and personally, including five years at an intentional community called Camp Joy Gardens and five years at the Farallones Institute, now known as the Occidental Arts and Ecology Center.

Michael’s bright eyes, clear thinking, and lean and healthy physique are no doubt related to his commitment to healthy food.

As I eat my carrots and hummus, I find myself hoping that I’m as vital as he thirty years from now.

The view from Taft Point

We eventually get up from lunch to continue our winding journey to the top. Michael’s own journey from farmer to his status as a noted and influential leader in the spa world has had its own curious turns, too. As we ascend, we become hiking partners and he tells me part of his life’s story…a story unequivocally intertwined with the origin story of his groundbreaking spa Osmosis Day Spa Sanctuary.

During a stopover in Japan while on his way to tour sustainable agriculture techniques in China with the New Alchemy Institute, he met the head gardener of Myoshinji Temple in Kyoto.

Whether through luck or divine intervention, the gardener invited him to be an apprentice.

At this point I began to gain insight into the bravery and trust with which Michael Stusser lives his life: with little prior planning, he committed to live in Kyoto with a 4th-generation traditional landscape garden family.

It was here that Michael fell in love with Japanese style gardens.

Today he speaks with deep respect and love as he describes the sense of peace and stillness that gardens can evoke—a welcome contrast from the measured chaos that often erupts while farming vegetables.

He stayed for a number of years in Japan and became a full time Zen practitioner at a monastery.

From farmer to novitiate monk. There’s still a few more details that led to Osmosis, but at this point I’m already hiking–and listening to him–in awe.

This guy helped to start the modern food movement, and he’s also a Zen practitioner!

His is an amazing life, and I’ve only had about a mile’s worth.

At this point, I have fully accepted Michael Stusser as my guide for my experience in Yosemite. I’m eager to learn more.

We’re deep in the woods, surrounded by trees and as I’m processing what I’ve learned, we crest a hill and turn a corner and come face to face with the northwest side of Half Dome.

Two: Allow Yourself to Be Amazed by the Natural World

Half Dome and Yosemite Backcountry

Our group gathers and we stop to take a breath. A picture. A deeper breath. Another picture.

It’s difficult to describe the feeling of seeing such a clear view of 50 million years of geological action.

From this point, it is almost possible to envision the giant glacier that covered, and slowly carved, the sheer face on Half Dome.

Michael has been coming to Yosemite since he was a teenager. He’s hiked much of the backcountry, the forecountry—hell, he even spent a night once on top of Half Dome.

He points out several different sections of the park and tells us about hikes, mishaps, and starry nights here and there.

He’s about as familiar as one can be with any land, and yet he looks at it as if it is brand new.

A newbie to the park, I’m floored by the view—and Michael is right there with me.

This is a man who knows how to fully embrace the natural world and see its newness and beauty everywhere.

We see a Jeffrey pine and someone picks up one of its large cones. “How do you get out the pine nuts?” someone asks the group.

We discuss the process and Michael observes that while humans have a difficult time extracting these seeds, squirrels are very efficient.

He tells us a story:

I was on a vision quest and I hadn’t eaten or had any water in many days.

I came across a cone and while contemplating it, I found one lone nut inside!

It seemed that the squirrel had either forgotten it, or perhaps even left it there for me.

It was the most delicious pine nut I’ve ever had in my life. Ever since then I’ve held pine nuts with the highest reverence.”

There’s no ego in his story. It is clear that he doesn’t care if we are impressed that he went on a vision quest—just an honest recounting of a time that he felt completely connected to the natural world.

This story stuck with me.

I was impressed with the way he took such a playful question and turned it into a nice little lesson.

The juxtaposition of the vast expanse of Yosemite, Michael’s magnanimous squirrel, and the lone pine nut stuck me as an example of how we, as humans, are simultaneously so big and important, yet so small and fragile.

We continued on to Sentinel Dome.

During his study of Zen, Michael developed a serious case of sciatica. He sought a cure exploring traditional allopathic medicine as well as other healing modalities.

His search led him to the fermentation bath, which is now the signature treatment at Osmosis. While it provided relief to his pain, this bath, the very first enzyme bath that he took, also changed the course of his life.

To hear Michael wax poetic about fermentation and the Cedar bath treatment is to hear a master explain his true passion.

Microbes work within and without to cleanse the skin, boost metabolism, break down lactic acid, balance body chemistry, promote a better night’s sleep, improve digestion… the list goes on.

He’s a believer in the healing powers of these baths.

His very first bath in Japan inspired him to enter into the world of spa and to offer his powerful healing experience to others.

He felt it was a calling and a mission. Here it is in his words:

As the healing warmth of the bath enveloped my being, the whole picture of a healing sanctuary with a magical fermentation bath at the core surrounded by meditative Japanese style gardens, architecture, and gracious hospitality flashed before my mind’s eye.

From this remarkable moment, I knew it was my calling to come back to Sebastopol and make recreating the Japanese enzyme bath my focus.

I knew nothing about spas or business.”

Over thirty years later, his business is thriving.

What I love about Michael’s story is that each piece of his life clearly led to the birth of Osmosis and his commitment to providing a healing modality to the world.

From farmer to monk, to the bather, to healer, to a successful businessman and pine nut connoisseur–his trusting approach to life made it all fit together.

At any point along the way, it could have gone a thousand different directions.

To me, the story that he shared is a reminder that we can’t be sure where our lives are taking us, but if we are open to possibilities and working to authentically connect with our natural selves, then we can find our own peace and purpose.

We sat on top of Sentinel dome, reconnected with the rest of our group, circumnavigated the dome’s top and took in the 360-degree view of Yosemite and the Sierras beyond.

The wind blew and the slightly overcast day provided a complementary backdrop to the mountain range’s jagged undulations.

During that moment, contemplating Michael’s story and taking in such a dramatic example of the Earth’s beauty, I felt an overwhelming sense of calm and peace.

Michael describes the healing power of the natural world as “a magic balm that soothes the soul.”

My experience of hiking in Yosemite with him exemplified that.

A hike in a beautiful place with a great person can go a long way to inspiring happiness and a desire to do good things in the world.

I felt very lucky to stand over 8,000 feet in the air with such a grounded guide.