Castor Oil: Is it Safe for Those Who Want to Treat Constipation?

According to the National Institute of Diabetes and Digestive and Kidney Diseases (NIDDK), around 16 out of 100 adults have constipation. Moreover, those who are above 60 years old are most at risk of experiencing constipation symptoms.

The question is, can castor oil effectively treat constipation?

This article will discuss how this medicine affects your health, its other health benefits, and which are contraindicated to using it.

What is Castor Oil Made Of, and How Does it Work?

Derived from the castor plant, this oil medicine is used as an alternative natural treatment for some medical conditions. Generally, this is a stimulant laxative whose primary purpose is to contract the bowel harder than they usually do.

Like when you consume more fiber, when you take this oil medicine, there will be an increased bowel movement to encourage the passing of stool easily.

However, it is essential to understand that using this oil for an extended period can cause your bowel muscles to work improperly.

If you wish to take castor oil, use it occasionally or talk to your doctor for proper medical advice.

If you experience recurring constipation, you can also try other natural stool softeners or other laxatives such as olive oil or Dulcolax suppository.

Although this medicine can be a treatment for constipation, there are also possible side effects when using this oil medicine, especially when you take it regularly.

Some of these side effects that your doctor may speak about include the following:

However, take note that once you take this oil medicine, you can experience diarrhea. Eventually, you can also be at risk of electrolyte disturbances, thus, it is highly advised to take electrolyte replenishers together with castor oil.

As one of the stimulant laxatives or stool softener medicines prescribed by a doctor, peer-reviewed studies support castor oil in relieving constipation.

Based on a clinical trial from Turkey, it was found that castor oil was able to reduce the symptoms of patients with chronic constipation or with a severe intestinal blockage.

Remember, there are two types of constipation.

The first one is acute constipation, and the second one is chronic constipation. The difference between these two is that the former only lasts for around three days while the latter can last for months to years.

Moreover, according to a study from the United States, it was also found that this natural laxative can prevent constipation.

So, if you ever go to a feast, you can also consider it. Again, you should only limit its use because castor oil may cause side effects.

To avoid side effects, you should know the proper dosage for castor oil.

Usually, a medical doctor will determine the right dose for you. This dosage will depend on your age, weight, current health status, and the medical condition you want to treat.

For adults who are to undergo colon and rectal surgery, the recommended dosage by a doctor is around 15-60 mL, which should be taken 16 hours before the procedure.

A doctor will still depend on a child’s weight when computing the dose to prevent health complications.

Moreover, castor oil should be taken on an empty stomach.

However, it has a thick consistency making it hard to swallow.

If you want to skip this unpleasant taste, you can consider mixing castor other beverages such as the following:

Of course, it is better to take this medicine without these beverages. However, if you cannot tolerate the taste and you find it hard to swallow the oil, you can consider small amounts of those.

b) How Long Does it Take for Castor Oil to Work?

Typically, castor oil is fast-acting. However, always remember that not everyone can experience the same fast-acting effects.

In some patients, castor oil may regulate bowel movement within three hours; in others, this medicine may take up to two to six hours to work.

Since this medicine can offer a delayed effect, you might want to consider taking castor oil during the morning.

If you are using this oil and you experience bleeding in your rectal area, seek professional medical advice as soon as possible to avoid serious complications.

Other Health Benefits of Castor Oil 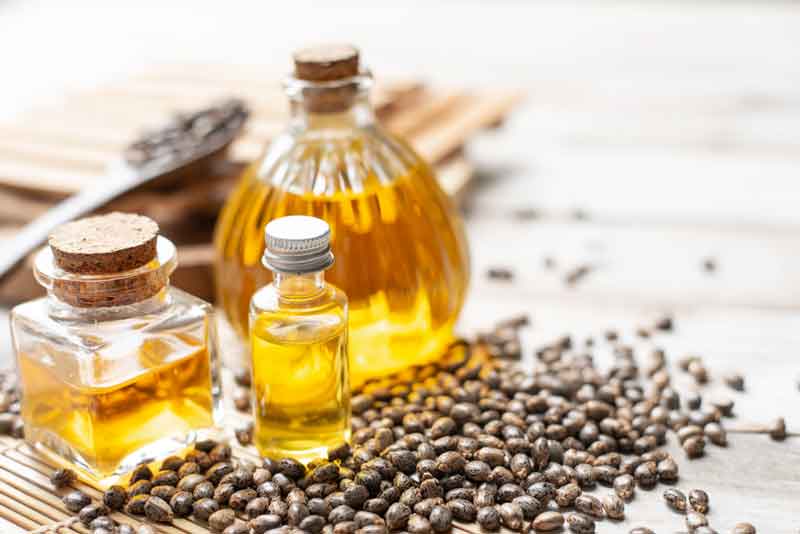 Nowadays, castor oil has been used in different areas. Some manufacturers use them to make soaps, waxes, paints, and even cosmetics.

Interestingly, according to a study from Italy, castor oil can be used to induce labor.

The other benefits of castor oil will be discussed in this section.

Unlike other dietary supplements, castor oil has potent laxative effects and has been approved by the Food and Drug Administration (FDA) as a stimulant laxative. Aside from relieving constipation, it is also used to clean the bowel before surgery.

According to a study from India, castor oil contains around 90% ricinoleic acid, a fatty acid. When you use castor oil, this oil will be broken down in the small intestine.

Then, the ricinoleic acid binds to the intestinal walls to promote laxative effects.

A clinical trial from Turkey reported that those who took castor oil experienced less straining bowel movements and a lower frequency of incomplete bowel movements.

Again, castor oil is not recommended for long-term use as it may cause stomach pain and other side effects.

Castor oil contains fatty acids that can moisturize the skin.

According to a study from Indonesia, these fatty acids act as humectants. They are often added to cosmetic products such as lotions, makeups, toners, and cleansers.

In another study from Italy, some dermatologists also recommend castor oil as an effective lotion alternative since other medicines in the cosmetic industry may contain harmful ingredients, such as dyes that can irritate the skin.

Aside from avoiding these harmful substances, you can also use castor oil safely on your skin.

You can combine castor oil with olive, almond, or coconut oil for better effects. However, take note of how castor oil affects your skin. In a case report from Spain, some people taking castor oil experienced allergic reactions.

Aside from cosmetics, castor oil can also be used to support wound healing.

Some of these include pressure and diabetic ulcers, burns, and surgical wounds. Generally, this medicine prevents these sores from drying out and reduces their odors.

According to a study from the USA, castor oil has anti-inflammatory and pain-reducing properties. Thus, this medicine can potentially be used as a topical wound treatment.

Another exciting use of castor oil is its effectiveness in cleaning dentures.

This medicine helps in reducing the risk of developing denture stomatitis. Castor oil works by killing the bacteria and fungi that cause inflammation of the mouth.

In a study from Brazil, it was reported that mouthwash containing castor oil could improve the symptoms of stomatitis. This benefit is the same when dentures are soaked in a castor oil solution.

Who Should Avoid Castor Oil?

Using castor oil is safe but it is also worth mentioning that castor oil is contraindicated in some patients. Some of these include the following:

For adults, too much castor oil can reduce your potassium levels. For children, this medicine should also be avoided. A medical doctor will best give the proper advice, diagnosis, or treatment regarding your gastrointestinal issues.

Lastly, possible interactions can also be observed when castor oil is combined with other medications. Some of these medicines include certain OTC products like probiotics and blood thinners.

If you are taking other medications for your health, make sure to tell your doctor about these drugs.

It is an alternative medicine not just for constipation but for other minor health conditions as well.

Generally, just a spoonful of this medicine can already offer its effects.

Because of this, it is important to know the proper dose for you to avoid health complications.

In case of accidentally taking too much of it, you should contact the Poison Control Center or seek the advice of a healthcare professional as soon as possible for proper medical management.

Although this medicine is safe for children and adults and has been approved by the FDA, castor oil has some contraindications. Some of these include pregnancy, bleeding disorders, and other rectal disorders.

Lastly, to avoid overdose and other health complications from this medicine, it is highly advised to seek a doctor’s recommendation.

A doctor will provide a proper diagnosis to improve not just your health but your overall well-being as well.

How much castor oil should I take?

The amount of castor oil you should take depends on your health condition, age, and weight. Sometimes, the dose will also depend if you will take this medicine before undergoing surgery.

When should I use castor oil?

It is best to use castor oil on an empty stomach. Additionally, you should take it in the morning as it can cause diarrhea which may cause sleep disturbance if you take it at night.

Is it safe to take castor oil every day?

No, it is not safe to take castor oil every day. Taking this medicine for a long period can cause dangerous side effects.