It’s hard to believe that Dorian Yates grew up without any passion for sports.

Unfortunately, he got into crime.

By 16, he had joined a skinhead gang.

By the time he was 19, he ended up in a youth detention center.

Even though he wasn’t into sports, he gained quite a reputation for his athletic physique. As an inmate, he did powerlifting as entertainment.

When muscles developed, he realized he could be successful in fitness.

When he was released at the age of 21, he started going to the gym.

In 1983, he started his life in fitness, rising to the highest ranks of bodybuilding. At 24, he won his first major competition and took home a trophy.

He was then determined to make a name for himself. By the time he was 26, he was a professional bodybuilder.

Dorian Yates’ Workout & Training Program – All You Need to Know 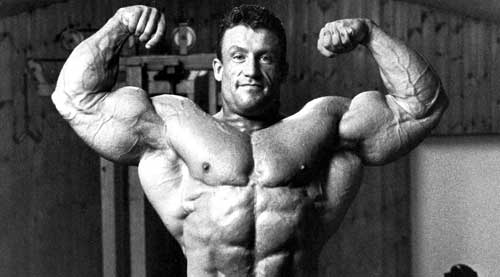 He had a high-intensity training program which he called the “Blood and Guts Training.”

It was ‘kinda extreme, but then he got the extreme results.

He has 8 workout principles that will give you a Mr. Olympia body:

1) Perform one all-out set to failure for each exercise

Dorian got superb results when he performed one all-out working set per exercise.

Research has shown that training to failure helps you to achieve max use of the fast-twitch muscle fibers.

2) Overloading the eccentric phase of your reps

Dorian believed in the science of eccentric training.

Here talks about the importance of emphasis on the negative reps in weight training.

He proved to the world that you can train to failure or with high intensity and still make use of multiple exercises per body part.

4) Record all workouts in a logbook

He did this so he could look at his previous workouts. His goal was to beat the logbook every single time he trained.

Dorian came to the conclusion that squats wouldn’t build his legs with his body structure.

For big legs, he realized he needed to focus on intensive muscle exercises like leg extensions, hack squats, and leg presses.

Dorian says that if you want to develop your upper back, use the Nautilus pullover machine. See him explain it here.

7) Train both heads of the biceps

He knew that if he wanted to improve his lagging biceps he needed to use three different exercises: incline dumbbell curls, standing EZ-bar-curls, and machine preacher curls.

8) Train each body part more than just once a week

A lot of bodybuilders train each of their muscle groups once a week. Dorian believes this is a mistake.

He discovered through trial and error that his best results were to train each muscle group once every 6 days.

He used a training split that he invented.

Dorian Yates has figured out a lot of smart things and applied them in his bodybuilding training methods.

A lot of bodybuilders use the “monkey-see” and “monkey-do” training program – kind of doing what everyone else does without thinking too much about it.

But Dorian was just the opposite. He first broke stuff down, figuring out exactly what was responsible for building muscle mass, and what was the useless stuff.

He believed that high-intensity training with multiple exercises and forced reps per body part was the best way to train. This would achieve maximum muscle mass.

He also used a few tricks – like the pre-exhaust method, controlled negatives, and novel exercises.

These speeded up the muscle-building process.

He said, “I’ve relied on a number of Weider Training Principles since the very beginning of my bodybuilding career.”

They are aimed at achieving new levels of muscle growth and strength.

He would ensure he got in lean proteins, complex carbs, and green veggies.

Dorian would always use some type of dietary supplementation to enhance his potential and reach his goals.

He even has his own supplement company.

“The mind is key to everything, whatever you do physically is determined by your mindset” – Dorian Yates