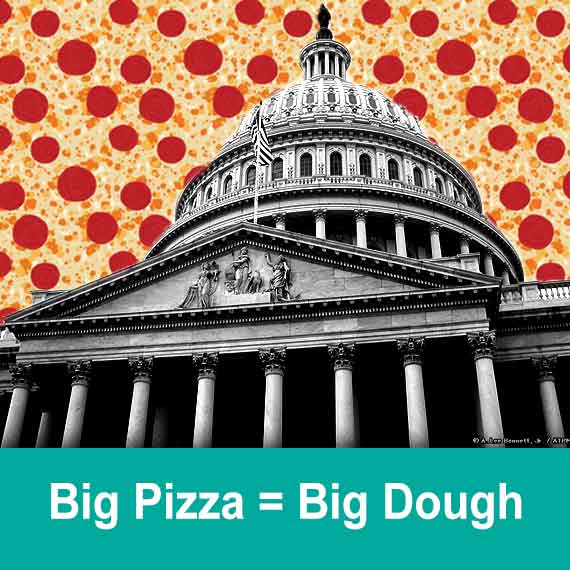 Andrew Martin of Bloomberg has written an excellent article explaining all that we need to know about this powerful group promoting their unhealthy food.

The pizza lobby exists in Washington

First and foremost, Martin has brought our attention to the potentially growing power of this group:

Pizza advocates . . . [have] separated themselves from other food groups in Washington to become their own lobbying force.

But they have notched some successes, proving that under the right circumstances, firm resolve and a thin crust can still be persuasive in Congress.”

The APC formed as a result of proposed labeling laws that require calorie counts next to items listed on menus.

Pizza would have been required to be labeled as a whole pie, and the 10,000 calories that some of them hold, caused fear of consumer backlash for the pizza industry.

Domino’s hired a lobbyist in Washington to fight against menu labeling, while Liddle [an APC executive] and her counterparts sounded the alarm far and wide.

They recruited franchise owners, suppliers, and other big chains such as Papa John’s and Little Caesars, representing roughly 20,000 restaurants.”

Remember when pizza turned into a vegetable?

Tomato paste gave it this metamorphosis and allowed it to stay on school lunch menus.

When the USDA proposed to close this “tomato sauce loophole” the pizza lobby fought it hard.

Congressional delay strategies employed by Big Food backed Congress members stopped these new rules, and others from being implemented.

Pizza is still a vegetable and therefore, still allowed on our school lunch trays.

I advocate for fruits, vegetables, and whole grains to play a larger role in our kids’ diets. As adults, we have a responsibility to ensure that school lunch is nutritious and healthy.

Pizza is fine, but I think we should leave the decision of how much and how often up to parents.”

The pizza Lobby gives its support primarily to Republican candidates

While the APC claims to be fighting for the local pizzeria, it’s Big Food ties seem to argue otherwise.

The republican ethos of small government, big business, and few regulations seem to be the go-to philosophy of pizza companies.

Fresh and frozen, the pizza industry tends to support Republicans.

In the last two election cycles, Republican federal candidates received about $1.3 million from the industry, according to an analysis by the Center for Responsive Politics of major companies and those listing “pizza” in their name. Democrats received just $157,000.”

With a Republican-controlled Congress, Martin speculates that the regulations on pizza will become less stringent over the next two years.

This group is fighting for their right to load America up with as much sodium and fat as it can, which is all the more reason that we as Wellness Warriors need to continue to fight for healthier food in our country.