The mere name of this exercise sends chills down the spine of many wannabe trainees.

“Why would I want to have my skull crushed?”, they ask, not knowing the sin they have committed.

Because in the world of bodybuilding, defined horseshoe-shaped triceps are paramount to godliness, and must be forged with the holy skull crusher.

All jokes aside, the skull crusher remains one of the most effective exercises for really bulking up and getting stronger triceps, and a movement you would be wise to learn.

If you’ve ever heard someone talking about lying triceps extensions, this is what they meant.

Still worried about crushing your skull?

Don’t worry, when done with dumbbells, you are less likely to have this happen (haha?).

But before we delve into the meat of it all, let’s investigate what makes them so effective in the first place.

How To Do Skull Crushers With Dumbbells Like A Total Badass 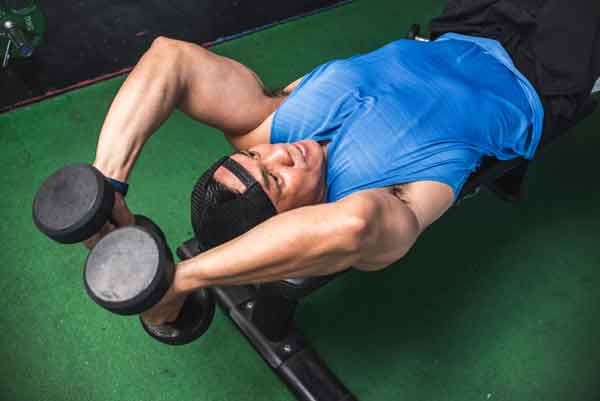 A Little About About The Anatomy Of The Triceps

While it is extremely common for most newbies in the gym to focus the majority of their upper arm training on the biceps, many seasoned gym veterans know that it’s actually the triceps muscle that is responsible for most of the “size” one will ever see in their arms.

In fact, even while located on the underside of the arms, the triceps still accounts for two-thirds of the upper arm’s musculature.

The biceps, meanwhile, account for only 1/3 of this amount.

That said, training the triceps should never be an afterthought, and one should always remember to put them first.

Now, with that in mind, have you ever wondered why it’s even called the tricep in the first place, while its companion is called the bicep?

Think of it as the three-headed muscle Cerberus guarding you against achieving thicker arms.

It must be thoroughly slain!

Complete tricep development, as you can see, benefits from a multifaceted approach.

While it is true that most tricep movements are multijointed and work all heads of the tricep, it is also a good idea to alter the position of the arm in order to more thoroughly fatigue and stimulate the individual heads.

Tips To Execute The Perfect Skullcrusher

Most people jump right into the exercise without a clue.

After a while, they then realize that it just doesn’t seem to be working out for them.

By then, it’s already too late—their triceps may have taken extensive damage from improper form and bad technique!

This is why you should always start off by assuming proper form from the get-go. Follow these prevent tips:

1) Always Keep Your Upper Arm Perpendicular To The Floor.

A perpendicular angle refers to the formation of a 90-degree angle with the floor- not necessarily with your body as a reference.

This is because dumbbell skull crushers can also be performed on an incline or decline bench, and would place your arms in an anatomically uncomfortable and dangerous position.

Ensuring your arm is perpendicular to the floor also ensures that you are working maximally against gravity and not struggling more than anything just to stabilize the weights.

Control is ultimately what separates men from boys, and is also the thin line between good form and bad.

If you are one of those people who’s always in a rush to do many reps quickly, give up now! You’ll never be able to master the skull crusher that way.

The Skullcrusher is about control–it’s specifically meant to isolate the triceps.

Remember to always control the weight slowly down on the negative, while straining through on the positive.

Don’t let momentum do all of your work for you!

Plus, if you really wish to maintain the integrity of your cranium, it really is in your best interest to not just drop the weight on the negative (ouch!).

3) Don’t Lockout Your Elbows At The Top Position

While everyone loves a good hard squeeze of the triceps at the top position, doing so a little too eagerly can actually set you up for an appointment with something called tendinitis.

Apart from causing elbow pain and tenderness, what it means is that you will spend weeks recuperating and unable to add meat to your arms.

Stop just short of elbow lockout at the top position.

Doing this will also add intensity to the movement as you won’t be able to rest at the top position, but just keep it moving.

The skull crusher is an isolation movement for the triceps, and as such, it is meant to stay that way.

If you find yourself bending at your elbows or raising them to shoulder height, you’re doing more harm than good.

Bending at the elbows not only takes a lot of stress off of your tricep muscles but also takes away from the movement’s intended isolation and exercise benefits.

Shoulder stability is a necessity with this movement.

Do yourself a favor and keep your elbows tucked at your sides throughout the entire movement, and just keep them straight while you’re at it.

Many people set themselves up for shoulder discomfort by bouncing around too much on the descent of the weight.

5) Your Hands Should Be Gripping The Dumbbell From Its Midpoint

For anyone who’s done even a little weight training, they know how to grip a dumbbell from its midpoint for a triceps kickback exercise.

However, this is not the case for other exercises such as skull crushers.

When doing skull crushers with dumbbells, don’t think it’s enough just to grip from where one of your palms rests- you need to hold the dumbbell in a “thumbs up” position (from the midpoint, of course).

This grip ensures that you keep your upper arms perpendicular to the floor and your elbow tucked to your sides.

Of course, you need to ensure that you can actually handle the weight you choose with control.

Overdoing it and you could spend the rest of the day laying in a hospital bed with a concussion or worse.

We get it- you really hate to pester random people in the gym to be your spotter, but this is an exercise that can really benefit from one.

A spotter can not only help you get in an extra rep or three but can help hand you the dumbbell or disarm you when you’ve hit failure.

So whether you grab a training buddy or ask a random guy to help you out, just don’t chance it if this is the first time you’re trying skull crushers with dumbbells. 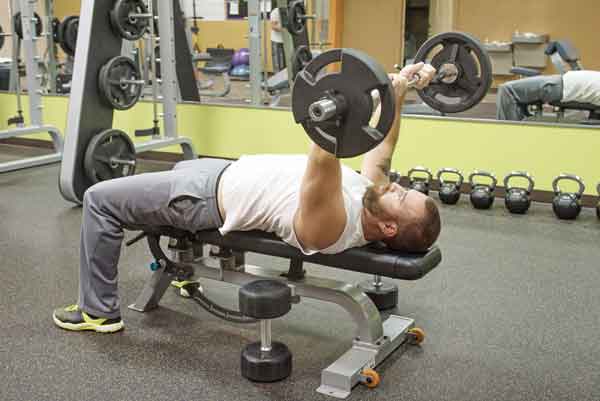 Yes, a lot of prep work goes into safely being able to do the exercise, but is it ever worth it. Without further ado;

Lie on your back, either on a bench or the floor, with two dumbbells; one on either side of your head (please, be careful and choose a weight you can control).

This allows your upper body to remove the reliance on your legs and makes it one of the best triceps exercises.

Keep your upper arms perpendicular to the floor, and elbows tucked in close to your body while you bring the dumbbells up towards the ceiling.

Rise to a point where your triceps are fully contracted and the dumbbells are next to each other.

Slowly lower the dumbbells back down to the starting position at the sides of your head.

It is also important to keep your neck stationary- imagine you have a fragile egg supported between your chin and neck and you can’t afford to crack it.

Pause for a brief moment at the bottom position to allow a full stretch of the long head of the tricep.

Contract the muscle and straighten the elbow joint, remembering to stop just short of full lockout to keep the tension throughout the entire movement.

Repeat for reps and sets as determined below. Keep your core engaged throughout the entire set.

How Many Dumbbell Skull Crushers Should I Do?

As with other isolation exercises, you can do dumbbell skull crushers at the end of your workout to completely “blast” your triceps into oblivion.

However, this is not always practical for most people, especially if you train in a busy gym.

If this is the case, try doing them before compound movements like bench presses or dips- the extra blood will be carried straight to your triceps and you should feel a tremendous pump.

If this doesn’t work, try doing them at the beginning of your workout when your energy levels are high and keep them in “beast mode”.

This way you should be able to get complete isolation for each individual muscle fiber without any help.

Perform repetitions in the vicinity of 8-12 for three to four sets.

The two-handed skull crusher is an alternative when you want to move heavier weight than you can with a pair, but tends to put the triceps in a disadvantageous position.

Whereas in the one dumbbell variation the shoulder blades may naturally rotate outwards as you press, the variation with both hands grasping the ends of a dumbbell and palms facing each other lock them into place.

You might be better off using an EZ Curl bar, which locks the wrists in place and allows for a more natural wrist angle.

However, if you do use dumbbells, start with something light until you get the hang of it; we don’t want any hairline fractures!

The French press resembles seated skull crushers except that some degree of movement of the shoulders and upper arms is permissible while elbows flare.

You are able to move more weight in this semi-variation.

It’s not hard to make a decent triceps training routine, but you would be well-served by including movement with the elbows locked into your sides, overhead, and perpendicular to the floor.

This is an exercise that should definitely be included in your routine because it works.

Just remember, if you are new to this exercise use lighter weight and take your time- nobody wants to be known as the guy/girl who was so overzealous at the beginning of their workout they shattered their face.

Also, keep in mind- not all movements were created equal.

Try out the other crusher alternatives such as barbell skull crushers with the straight or EZ bar and find out what works best for you.

Used with other smart upper body exercises and you are sure to transform your physique.