Whoa! Did Congress Really Just Agree On Something, And Was It Regarding School Lunches? 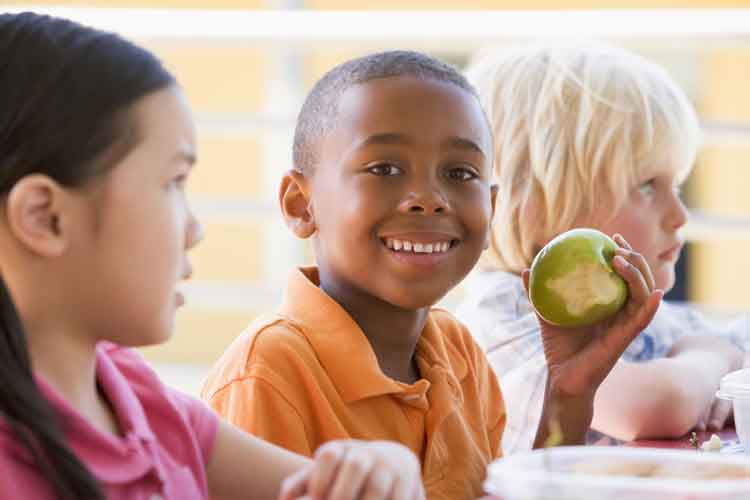 What we eat is influenced by our own personal heritage, and then we’re oft-confused by science and contradictory claims (butter is good, no butter is bad.

Low-fat is bad, but it was once good; paleo is the best, no…vegan is).

A similarly “loaded topic” is how to care for children.

Now, imagine combining these two topics and asking Congress (a group not known for its ability to agree on anything) to make a decision.

A recipe for disaster? Well, yes and no.

The last two years have seen a lot of vitriol over the Child Nutrition Reauthorization (CNR) that dictates the makeup of school lunches, but this week the quarrels were quelled when Congress finally came to an agreement.

As a reminder, the CNR is renewed every five years by Congress.

It guides most government programs that provide food to children, the biggest of which is the National School Lunch Program (NSLP).

In 2010, the Obama Administration, led by First Lady Michele Obama, enacted the Healthy and Hunger-Free Kids Act, which overhauled the NSLP to be healthier.

Though the HHFKA was widely well-received and showed signs of improving children’s eating habits, it has received a lot of pushback from schools, districts, and in some cases whole states (some calling for a full repeal of the HHFKA).

For a more in-depth study of the school lunch debate, check out our reports cataloged below.

The most outspoken critic of the HHFKA was the School Nutrition Association (SNA) a group of food manufacturers and school cafeterias that does heavy lobbying in Congress. Dana of Beyond Chron explains the SNA’s sordid tale:

SNA, which was a big supporter of the HHFKA in 2010, did an about-face in 2014 and began demanding rollbacks to the new regulations.

A widely read article by Nicholas Confessore in the New York Times tied the change of heart to SNA’s hiring of a new lobbyist, one friendlier to the interests of the processed food industry.”

Thus, what should have been a routine extension last year of legislation improving nutrition for tens of millions of children, became a drawn-out battle between those who prioritize children’s needs and those who appear interested primarily in the needs of processed food companies.

The SNA’s key complaints of the HHFKA were that some standards (including those on whole grains and on sodium) were too strict and that the requirements resulted in an unprecedented amount of wasted food.

According to Mary Clare Jalonick of the Associated Press, changes to the CNR address these concerns and more:

Also, to avoid any more conflict over the HHFKA, they’ve changed the name to the Child Nutrition Integrity and Access Act of 2016.

Many children’s-health advocates are supporting the new changes, including the Pew Charitable Trust, Marion Nestle, and Center for Science in the Public Interest, whose Nutrition Policy Director Margo G. Wootan stated:

Given all of the aggressive lobbying against school nutrition over the past few years, it’s remarkable that the new Senate bill is as strong a way forward as it is.”

In general, advocates are optimistic. “It could have been a lot worse, and right now it doesn’t look so bad” is the general tone.

Well, again: yes and no.

Though this is certainly a push in the right direction, food writer and school lunch expert Bettina Elias Siegel recently wrote an op-ed in The New York Times analyzing the state of school lunches in the U.S. as compared to the idealistic counterpart of France (an oft-made comparison because many of the French meals are cooked from scratch).

She explains that the economic, policy and societal levers that are in place in our food system prevent us from being anywhere close to creating “from-scratch” cafeteria meals while keeping a school afloat financially.

In the end, she concludes:

School meals in other countries fascinate us because they reflect a society’s true food culture, as well as its regard for its children.

Here in America, schools are doing the best they can to meet the nutritional needs of millions of children every day, but unfortunately our society is unwilling to do what it takes to truly feed them well.”

We can all celebrate the fact that our school lunches are now heading more in the right direction.

And, at the same time, as Siegel explains, there is still a lot of work that we can do within the school system, and within our country, to improve things even more.