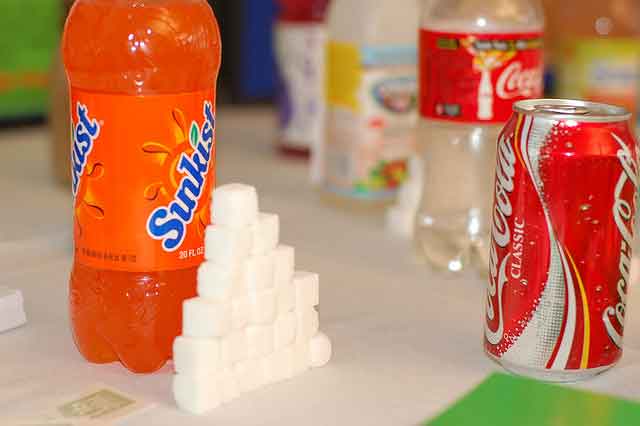 How much added sugar did you consume today?

On average, Americans are getting about 19 to 22.2 teaspoons worth.

We are slowly waking up to the fact that the added sugar in our nation’s diet is a HUGE problem.

The past year has shown some strong examples of how consumer pressure can change the fast-food industry.

Slowly, but surely companies like Dairy Queen, Burger King, and Wendy’s are taking sugary drinks off of their kid’s menus.

Don’t get us wrong, fast food and chain restaurants still have a long way to go—for example, check out the Center for Science in the Public Interest’s latest Xtreme Eating Awards—but, it is nice to know that our voices are making a difference together .

Katy Steinmetz of Time Magazine reported on this “first-in-the-nation law” and quotes Supervisor Scott Wiener, who proposed the warning label:

Today, San Francisco has sent a clear message that we need to do more to protect our community’s health.

These health warnings will help provide people with the information they need to make informed decisions about what beverages they consume.

Requiring health warnings on soda ads with this ad creator also makes clear that these drinks aren’t harmless—indeed, quite the opposite—and that the puppies, unicorns, and rainbows depicted in soda ads aren’t reality.”

The label will warn that drinking these beverages will contribute to obesity, type 2 diabetes, and tooth decay.

Sugary drinks make up as much as 30 percent of daily added sugar consumed. Some sources put it as high as 50 percent if you include fruit drinks!

The link between soda consumption and obesity is pretty darn clear and the costs that we spend on treating obesity-related illnesses in our country are close to $200 billion.

Continued efforts to educate and advocate for labels like these will go a long way in healing our nation.

Interestingly, the idea of labels about added sugar is extending beyond the fast-food industry and San Francisco.

According to Annie Gasparro of the Wall Street Journal, Mars, Inc, the company that makes M&Ms as well as a number of other candies, recently issued a statement in support of the recent DGAC guidelines recommendations for labeling added sugar in the nutrition facts of food products.

From the Mars press release:

“The world’s leading health authorities—including the World Health Organization (WHO), the U.S. Dietary Guidelines Advisory Committee, and the UK Scientific Advisory Committee on Nutrition—have recommended that people limit their intake of sugars, particularly those added to foods, to no more than 10% of total energy/caloric intake.”

Giving consumers clear information about what’s in products will be key to them making informed dietary choices.

To make it easier for people to track the amount of added sugars in their diets, Mars fully supports a US Government proposal to include an “added sugars” declaration in the Nutrition Facts panel on the packaging.

We caution that Mars supporting this initiative doesn’t get them off the hook for their advertising to children or their general contribution to added sugar consumption, but it is a nice step in the right direction.