Zac Efron is an American actor.

He also sings and does film production.

He gained worldwide recognition when he starred in High School Musical as Troy Bolton – it ran for two years.

Being a film producer, he founded his own production company known as Ninjas Runnin’ Wild, which has produced a few of his movies.

He also has been pretty successful in the music industry as well.

Most women, however, love seeing Zac with his shirt off.

It’s because this guy underwent a radical transformation when he starred in Baywatch in 2017.

His body was literally breathtaking!

In the movie, as a lifeguard and having tire-flipping contests with his co-star Dwayne Johnson so, you can imagine he has to look hot on the beach!

OK, he has always worked hard on his physique.

He was stunning in 2014 in Neighbors.

But his transformation in Baywatch shocked the world.

Patrick Murphy, who is Efron’s trainer, said that Zac reached 5% body fat after just 12 weeks of training! The man looked like an absolute unit throughout the movie.

If that’s not the body you want for your next beach day.

Well, you can, with some hard work and diet. 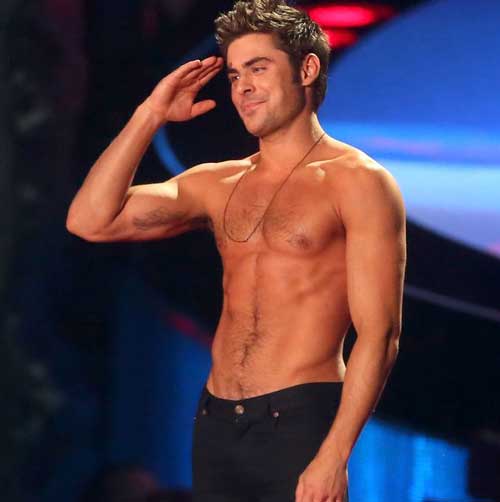 One aspect of Zac’s body does make you do a double-take – how shredded he looked in Bay Watch.

As mentioned above, he succeeded in maintaining his body fat percentage of 5% for filming.

His trainer achieved that with Zac in just 12 weeks.  He claimed that Efron’s impressive work ethic made things so easier.

But here are some of the important workout principles from Zac’s trainer.

After all, he has trained other celebrities for 20 years already.

Let’s look at the principles

This prevented Zac from hitting any plateaus.

It was all about to go, go, and go for three months.

Murphy was determined to get Zac shredded and he achieved it.

Zac shed fat during this time and gained muscle, challenging his body every day.

Murphy put through Zac through that very tough schedule to get him into that shredded look.

Another principle that guided Zac’s training, the main one that Zac’s workouts were built on, was called Supersets.

Supersets are a mainstay in guys in the gym

Even Arnold Schwarzenegger was a huge proponent of supersets.

He had superset arm days which were very popular. Superset training requires a person to perform two different exercises back-to-back.

You have to eliminate or minimize the rest times in between.

Much like compound exercises, lots of muscles get hit in a short space of time.

When you are going fast and doing one after the other in terms of sets, you are increasing muscular endurance. You are also influencing neural capacity.

You can understand that there is a major metabolic benefit to training with supersets.

If you want to get a 5% body fat percentage like Zak, then you will need to burn quite a bit of fat off, even though you aren’t in bad shape.

Supersets are known to increase the power output of an athlete.

The supersets route is a good path to a shredded look with rippling muscles.

Zac’s workout goes over 3 days. On the first day, he works on his back and biceps.

On his second day he works his legs, and on the third day, shoulders, chest, and arms.

He does this in three consecutive days and then takes a day off after that.

If you need more than one day to recover, take a day off after 2 days and then continue with the training methods as you normally would.

After you finish a superset, take 60 seconds of rest in-between before moving onto the next superset. Remember to do some stretching and warming up before each working out.

At the end of your workout, take a break for at least 15 to 20 minutes to do some cardio or whatever you want, not too intense – something you enjoy.

As far as the weights go, this will depend on our own strength.

The weights will be dependent on your own strength

For the weights workout, your muscles need to be greatly challenged.

Bear in mind how dense the workouts are.

You need to avoid injury here, as that can set you back – rather take things easier first.

You need to get off on the right foot by choosing weights that you know you can handle, and then move up from there.

It makes sense that Zac was not able to eat a beach-bum kind of diet while he was achieving his Baywatch physique.

So what he did was to “implement an all-organic whole-food diet” according to Murphy.

Zac was allowed to choose from 5 categories of food to put his meals together.

In the 12 weeks Zac achieved his magnificent body, he was allowed to select from these foods:

NO processed foods were allowed, no bad fats, and no flour

Murphy was insistent that the whey protein could contain no other ingredients.

Zac also had to drink around three liters of water a day.

Murphy has never disclosed all the specifics of Zac’s diet. He just says that Zac would change his calorie intake around every two weeks.

This would go along with his breakdown of carbs, protein, and fat with charming results.

In an interview with Men’s Fitness, Zac said “After a while, your body stops craving junk food and you look forward to these meals. There’s this trigger that happens after two or three weeks of dieting and eating healthy food, where your body switches its primary energy source from burning mainly carbohydrates to burning fat.”

He said that when this switched over in his body, all his cravings changed. Now suddenly he was yearning for the healthy foods from his list that Murphy had provided.

Zac’s fitness goal, particularly for Baywatch, was to be “fast and light”

Zac said he wanted to be lean when people saw him in T-shirt; he didn’t want the body of a bodybuilder.

To achieve all the energetic moves that Baywatch required, he had to keep his body fat minimal.

His trainer/nutritionist, Patrick Murphy, knew just the right combinations for him.

The designed diet was very low-carb, with an emphasis on fully organic whole foods.

Murphy spent 10 weeks helping Zac to “drop the last bit of body fat” and “get into the best shape of his life.”

It was not easy because this was not just one scene in a movie.

Zac was prepping for an entire movie where mostly he wore nothing but a whistle and swimming trunks.

Efron tweeted about the strict diet he had to follow for his Baywatch training “[Nine] days of absolutely zero carbs & sugar. Only organic grass-fed/free-range protein and organic leafy greens,” he said.

Even though drinking copious amounts of water is a legitimate strategy for bodybuilders to follow, dehydration isn’t that practical for the average guy who wants to not look so much like a bodybuilder, but rather, lean, mean, and shredded.

While supplements aren’t essential when you enjoy a very good, healthy diet, still, they bring that extra edge that you will want if you want the Baywatch-level physique.

While he was working with Murphy, Efron drank plenty of whey protein and water

The transformation of Zac Efron who shot to fame in the High School Musical movie has literally amazed people across the world. Zac’s trainer says Zac reached 5% body after just only 12 weeks of training.

How does it work? Even though his training was constantly changing, Zac’s trainer, Murphy, condensed it into a three-day split. Zac would work his biceps and back one day, his legs the next day, and his chest, shoulders, and arms on the third day. Abs were also worked each day.

Recommendations for workouts are the supersets

It’s doing two exercises back to back. No rest in between.

This approach saves you time. Supersets help the body to burn more calories.

They also enhance the “pump”.

Pumping drives more nutrition-filled blood into the muscles for them to grow fast. Some exercises are explosive to muscle mass, but also build speed and agility.